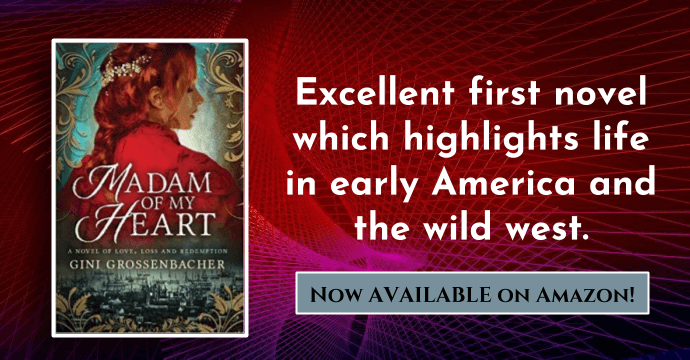 Baltimore, 1849. During a scandalous crisis, the young Irish Brianna Baird flees her home at Fells Point. With little cash and only a seamstress’s trade, she braves the hypnotic streets of New Orleans. The tantalizing Madam DeSalle lures her to her brothel, then sells her to the dashing but questionable gambler, Edward Spina, who falls in love with her. In a tawdry alliance with these two profiteers, Brianna embarks on a journey through the French Quarter’s debauched and glittering Voodoo world. Facing the horrors of slavery, she triumphs by gaining freedom papers for her maid Emma’s enslaved husband and son. Brianna and Edward escape with them to San Francisco. There she becomes one of the most sought after madams in the gold rush parlor house trade. But will her fame and pluck be enough to save Edward from the Vigilante noose? This is the first book in the American Madams series.
Available on Amazon Barnes & Noble Kobo Goodreads

“This novel reveals a history you never learned in school . . .”


“Madam of My Heart” begins by introducing the reader to a teenaged Brianna, alone at night on the docks of New Orleans, and in her darkest moment. “This time, her plan had to work. The bag lingered for a moment on the surface, but then the Father of Waters swallowed up her secret. Bubbles surfaced at the point where the cargo descended.” Thus, we are thrust into 1850s New Orleans. Gini spares us nothing of the sights and smells of the city and its inhabitants, including prostitutes, gamblers, slaves, and madams. Gini fills the pages of her novel with a history most of us never learned in school. We see how hard life was in the 1850s as we are taken from New Orleans to San Francisco where politics are as dirty as the streets.

Gini has written a fascinating book which takes a hard look at prostitution and the people, especially the women, who are part of the trade. I highly recommend “Madam of My Heart.”

Gini Grossenbacher taught high school English until she abandoned grading term papers to write historical novels instead. She loves researching the history behind her novels, and enjoys traveling to the settings where they take place. In addition to writing her own historical novels, Gini leads small writing groups and coaches other writers. Her hobbies include needlepoint, nature walks, and Scrabble. She lives in the Sacramento Valley where she grew up, east of San Francisco.