Madam of My Heart: A Tale of Love, Loss, and Redemption

"A debut historical novel that chronicles the struggles, loves, and joys of an exceptional madam in 19th-century America. Grossenbacher's book, the first in a planned series, dramatizes the early life and busy career of a woman named Brianna Baird. Raised in Baltimore in the decades before the Civil War, Brianna dreams of one day growing up to own a seamstress shop and marry a sweet man of virtue. But her plans unravel after she meets young Spenser Brown, a sweet-talking violinist who leaves her pregnant and betrays the promises he made.... Alone and knowing little of the world, she travels to New Orleans and finds work at the notorious parlor house of Madam DeSalle. There, she earns her keep first as a seamstress and later as the exclusive courtesan of gambler Edward Spina.... "Grossenbacher's prose is both graceful and inventive. She absorbingly limns the various cities Brianna inhabits, from New Orleans and its 'web of Creole cottages, chaotic marketplaces, and secretive balconies, simmering outside her window, ' to the rowdy atmosphere of frontier-era San Francisco. The occasional marvelous metaphor will surprise readers, as when 'the truth hit Brianna like a badly aimed bowling pin.' "This isn't just a novel for lovers of history's more prurient corners; it's for everyone who likes well-deployed language and intense stories. A seamier side of American history, engagingly told through one woman's unexpected adventures." 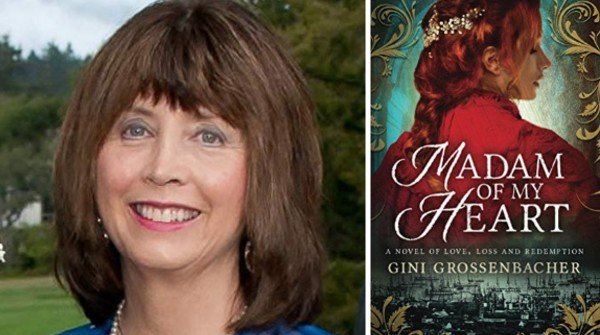 Baltimore, 1849. During a scandalous crisis, the young Irish Brianna Baird flees her home at Fells Point. With little cash and only a seamstress’s trade, she braves the hypnotic streets of New Orleans. The tantalizing Madam DeSalle lures her to her brothel, then sells her to the dashing but questionable gambler, Edward Spina, who falls in love with her. In a tawdry alliance with these two profiteers, Brianna embarks on a journey through the French Quarter’s debauched and glittering Voodoo world. Facing the horrors of slavery, she triumphs by gaining freedom papers for her maid Emma’s enslaved husband and son. Brianna and Edward escape with them to San Francisco. There she becomes one of the most sought after madams in the gold rush parlor house trade. But will her fame and pluck be enough to save Edward from the Vigilante noose? This is the first book in the American Madams series.

Gini Grossenbacher taught high school English until she abandoned grading term papers to write historical novels instead. She loves researching the history behind her novels, and enjoys traveling to the settings where they take place. In addition to writing her own historical novels, Gini leads small writing groups and coaches other writers. Her hobbies include needlepoint, nature walks, and Scrabble. She lives in the Sacramento Valley where she grew up, east of San Francisco.
Dear Reader, author’s recently published book “Madam of My Heart: A Tale of Love, Loss, and Redemption” is now available on leading bookstores, get your copy now and help the author by writing a review of the book.
Available on Amazon