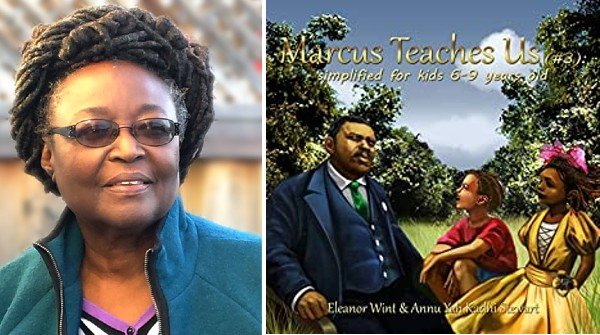 Using simplified language, “Marcus Teaches Us” is an engaging way to introduce children 6-9 yrs to Marcus Garvey the greatest black philosopher of the 20th Century.
Marcus Garvey wanted to unite all Black people under the eyes of God. Born in Jamaica and traveling to England, Europe and the USA, across the Caribbean and South America, he spread his powerful message of One God, One Aim, One Destiny to people everywhere. And now, by studying his wise teachings, we can solve the problems we face today.

This is a book which introduces Garvey’s philosophy to children. It tells us how Garvey went from being the son of a printer in the countryside of Jamaica to becoming one of the most influential black leaders in the world. This children’s book of Marcus Garvey shows us

The book is written for children between 6 and 9 years. There are many books for adults. But the children are our future. It is beautifully illustrated and written in language children will understand. The many activities help to remind children of other great Black heroes, heroines and influencers. To have their own book is a must for kids of this age as it encourages the sense of ownership and acts as a reference until they can read at a higher level.

Written for kids, “Marcus Teaches Us” that “You too can impact Black History”.