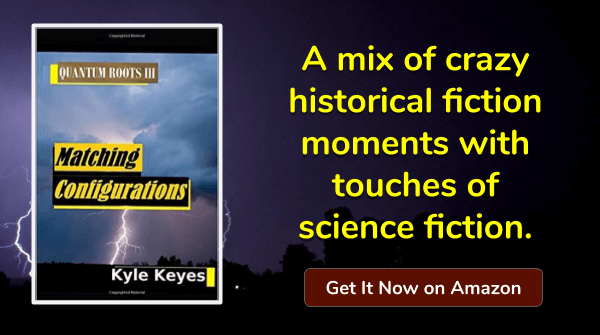 Matching Configurations is the second sequel to Quantum Roots, a light Sci-Fi adventure story that features everyday Olan Chapman as a hero vigilante who defends the weak and helpless victims of today’s society. Like the first two editions of Quantum Roots, Matching Configurations is based on a growing belief that creation forms from recycled energy, and people evolve from recycled quarks. The book contains more humor than science, as Chapman returns to Earth as someone he once was, and manages to elude Director of Paranormal Affairs, Lt General Alexis Grumman, who keeps both feet on the ground, while her young lover, Jeremy Wade goes cloud bound in a supersonic motor scooter that flies. Book has some content not suitable for readers under 18.
Available on Amazon Goodreads

Author Kyle Keyes takes science fiction to a new level - one interspersed with copious laughs and good-humored parody. MATCHING CONFIGURATIONS is volume 3 in his Quantum Roots series, and for this reader this book is the first encountered – and most assuredly will be followed by exploring the other two volumes! On his site the story is summarized – ‘Olan Chapman returns as Calvin Cannonball Cooper, a vigilante from yesteryear who uses powder guns, throwing knives and cannonballs to neutralize the bad guys of today’s society. History books fail to mention Calvin Cooper, but this defender of the weak and helpless, went down with Jim Bowie, Davy Crockett and William B. Travis in that 1836 slaughter we remember as The Alamo. Acknowledged or not, Cooper lives again each time Olan Chapman dons a cavalry outfit, found in a New England attic overlooking the sea. The novel is based on a belief that any quark assembly that spins through a series of worm holes, must format with a matching configuration triggered on this side of the Time Wall.’ The flavor of Keyes’ writing, as evidenced in opening chapter, pervades this wild ride of an hilarious tale – ‘The intruder slipped into the masquerade party unnoticed, an easy feat in a noisy room filled with zany people and daffy costumes. Mickey Mouse was there, and Donald Duck. As was Bugs Bunny, Bat Man, the Green Lantern and a host of other rubber faces. The intruder wore a black head stocking to cover a black mustache and two evil eyes, spaced too close together. His name was Muhammud Dym Lyt Farouki. He had a picture of a camel painted on his car top, and a Luger tucked in his black waistband. He was here on a holy mission to kill women and baby infants. “I don't see any children,” he whispered to a woman dressed as Xena-Warrior Princess. “This is an adult party” said the woman. “Allah will be angry,” replied the intruder. “I'm sure you can find your way back to your camel,” said the woman. World wars have been started with less fuel. The intruder pulled the Luger and aerated some mildewed ceiling tiles. Bedlam continued. The terrorist walked calmly to a roped off dance floor and targeted a be-speckled senior dancing with his wife. He shot the senior through the head. Screams filled the air as blood squirted to the floor. Party goers stampeded to the exits of this fire house second floor, only to find the stairwell doors locked. The terrorist fired more shots into the ceiling. All fell silent.’ Keyes is a fine writer and has found a niche in the bizarre realm of science fiction/time travel – one with a terrific twist of humor and fun. Grady Harp, May 19 I voluntarily reviewed a complimentary copy of this book.

CONTACT INFO enolder8@aol.com Kyle Keyes presents MATCHING CONFIGURATIONS / Quantum Roots III, based on a belief that any quark assembly that spins through worm holes, must format with a matching configuration, triggered from this side of a time wall.

The book is quite a page-turner, considering the fast-paced nature of the narration and the well-developed story.