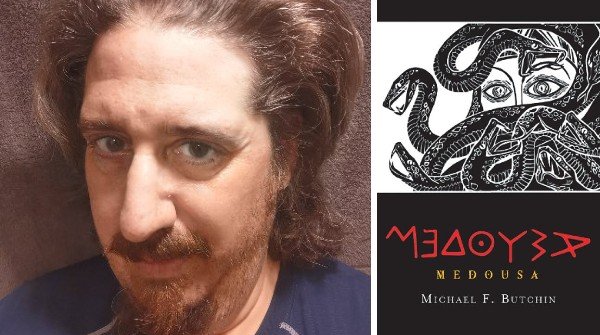 Medousa is a work of myth-based fantasy set in ancient Greece.

“Medousa” is a work of myth-based fantasy set in ancient Greece. It is a re-telling of the myth of Medousa from her own point of view, focusing on Medousa’s struggles to find love and acceptance, and to retain the best parts of her humanity while living under a Goddess’ curse. The book traces her life, from her childhood as a slave in Sparta, to her death at the hands of Perseus on a remote island at the end of the world. This book tells the story of who Medousa was, rather than the monster that she has been portrayed to be throughout written history. She was one of the most loathsome monsters of the ancient world. Feared by man, shunned by the Gods, with a visage so hideous, all living creatures who looked upon her turned to stone. Multitudes were slain at her hand until the hero Perseus finally killed her. Today, if we remember Medousa at all, we envision her as that monster. Very few remember what led to Medousa’s transformation from one of the world’s most beautiful women to one of the world’s most terrifying monsters. Even fewer remember the girl she once was, or the woman she strove to be, even under Athena’s curse. Who was Medousa? How did she become the creature so feared and reviled by mortals? Who was she before the curse of the Goddess fell upon her? Most people only remembered Ovid’s tale of a vain young woman who was so proud of her beauty, and especially of her golden hair, that Athena herself punished her by making her a Gorgon. But in fact, Ovid does note that Medousa, a priestess of Athena, was raped by Poseidon, in Athena’s temple. Medousa’s story is an unjust and troubling tale that remains relevant today. How could Medousa herself be punished for being the victim of a violent crime because it somehow defiled Athena’s temple? Why didn’t Athena defend her priestess? Why didn’t she bring complaint against Poseidon? Why did Medousa have to be destroyed because of what was done to her? Hadn’t her rape been enough to suffer through, but then she had to be driven from mortal lands, a monster, living in lonely desolation? A woman is sexually assaulted, and she bears the stigma, while her attacker is protected. The woman is expected to take responsibility for protecting herself, but we do not teach our boys not to rape. Men with vast sexual experience, consensual and not, are respected, but women who even express interest in sex, are shamed. This issue transcends mythical stories, as it bares relevancy in the world today. In America, a girl is raped, but the boy goes free because “he just made a mistake” or “we don’t want to ruin his entire life over one moment of poor judgement.” In central and south Asia, a woman is raped, and then she herself is punished for bringing “dishonor” upon her family, while her attackers go free. We have pity for the men, unwilling to see their lives ruined by their own actions; but we have none for their victims, the women whose lives have in fact been destroyed by them. And when those women dare cry out for justice, they are met with incredulity, and threats of murder and rape. Every time a woman is attacked, she must carry the blame and guilt. Every time a woman is cast out of her community for being who and what she is, through no fault of her own, Medousa’s story continues. This book tells that story, and it allows us to truly understand Medousa the victim, not the monster.

About the Author: Michael F Butchin

Michael F. Butchin is a Philadelphia native who grew up in South Jersey. He was born to a family of scholars, musicians, actors, and singers, and attended Rutgers University, New Brunswick, from which he graduated with a degree in Chinese Language and Literature. He also attended graduate school, where he read for Early Childhood Education. After graduation, Butchin lived in Taiwan for several years, where he worked as a kindergarten and Pre-K teacher during the day, and as an ESOL instructor at night. He has also traveled extensively in China. A survivor of abuse, Butchin took refuge in music and literature. Over the years, he has spent much of his life amongst a fascinating variety of unconventional and bohemian characters.