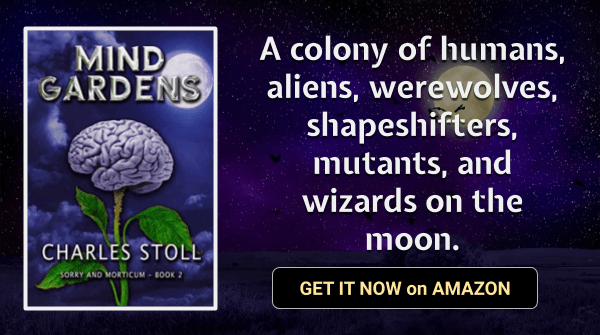 The Sorry and Morticum series continues a thousand years in the future. Sorry and his self-made family escape the chaos on earth in a Mutmut spaceship. They head for the ancient moon colony, Rumi, which has not been heard from in a hundred years. They are astounded by what they find there. Is it an alternative to death? Is this a method of finally discovering the inner workings of others? Can you really connect a hundred different brains and have them always reach an agreement? Take a seat in the mind gardens, if you dare.
Available on Amazon Goodreads

This sequel to Sorry and Morticum takes place many years from now. A climate disaster made the earth uninhabitable, and the survivors join a colony of humans, aliens, werewolves, shapeshifters, mutants, and wizards on the moon. A strange disease killed most of the colony, but some of the inhabitants survived by sacrificing their bodies and having their heads attached to a life source called the mind garden. There they can share their thoughts with each other and can talk with the few inhabitants who did not contract the disease. Stoll uses a great deal of imagination in creating each character with unique abilities and handicaps. Watching them interact is interesting and captivating, as the survival of life in the solar system rests on their ability to stay alive.

Charles Stoll was born in Farmingdale, Long Island in 1956. He received the N.C.T.E. National Award in Writing in high school and attended Syracuse University. His first book, Hanging in the Balance, was published in 1990. He moved to Ormond Beach, FL in 1996, where he currently resides. Charles worked in retail management until he retired in 2003 to write full time. He has served as president for the Ormond Writer’s League (O.W.L.’s). His novel, Enigma, Discovering the Moments That Form Your Life, was published in 2014 (Price World Publishing). “The Time Thief, Gatekeeper Press, 2015 and “Sorry and Morticum” Gatekeeper Press, 2016. All are available as e-book or soft cover. Writing is his love and his therapy and he hopes it positively affects the minds and hearts of his readers. Charles Stoll welcomes any comments or questions from his readers and can be contacted at cstoll5@cfl.rr.com.

Can you really connect a hundred different brains and have them always reach an agreement? Take a seat in the mind gardens, if you dare.