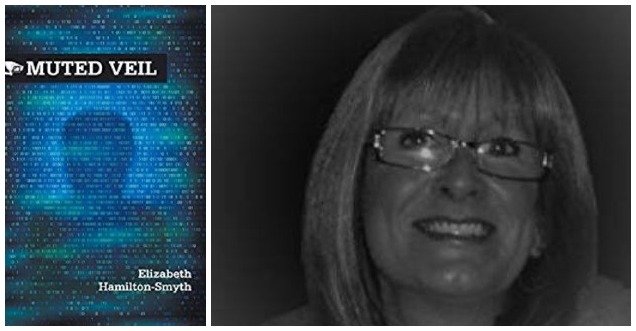 When Frances concocts an elaborate plan to escape today’s world of surveillance, her hopes to live off the radar are soon crushed by long-buried secrets which will entwine her life with others forever.

Having fled to a remote village in the south-west of France, she employs Julien, a mute builder, to renovate her house. Communicating by notes written on pages torn from a jotter, they form a strange, silent bond, but when a newcomer moves into the neighboring property, followed by men inspecting her land in the dead of each night, Frances’ concerns for her privacy spiral. While fighting to defend her covert existence, fear soon turns towards murder, and Frances finds she uncovers a series of gruesome, historic events…
Available on Amazon

At first I felt transported back in time during the first chapters of the Muted Veil, feeling like I was imbedded inside a Poe story. Then, using the artful descriptions and narrative style of Mary Stewart, the story advances to the next stage and the reader is hooked in a modern-day psychological mystery, The narrator, a graphic designer named Frances, has an extreme paranoid personality, and, as the novel begins, lives her life in isolation, absolutely certain she is being surveilled and followed by who knows who. She is subject to nightmares regarding a decaying corpse and Frances always feels intruded upon and under attack. A chance friendship with an elderly Frenchman sets the wheels in motion for her to start a new life in France after learning she is his sole beneficiary. Suffering from Ménière’s Disease, she finds a new home in a quaint French village where no cameras lurk and she can live her life in peace. However, her serenity begin to unravel as she discovers a cover-up involving her mute handyman, Julien, and newfound friends, Pierre-Yves and his wife, Valarie. This exceptionally well-written and engrossing mystery, entraps the reader in its pages to the shocking end. Highly recommended!

Elizabeth Hamilton-Smyth ran her own manufacturing company for over twenty-five years before taking a change in direction. Her translation of a fellow author’s novel from French into English inspired her to write one of her own. MUTED VEIL is her debut novel, born from an analysis of the intricate details of the human mind and its response to external provocation.
Elizabeth lives in an old house in Devon, England with her six feline friends and is currently working on her next novel.