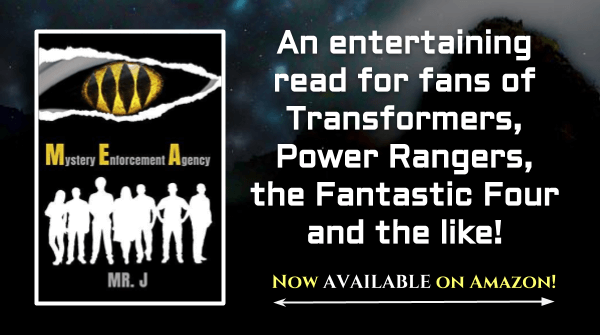 Seven complete strangers who are barely into adulthood, have been accepted for a job role based in London that is not what they originally signed up for. The Mystery Enforcement Agency is real but a world which many of us would think of as supernatural, or simply weird. Their duties are to uphold law, order and most importantly to deliver justice for the good and the bad, whatever they may be.

Their new boss and other colleagues are interesting, to say the least. If that wasn’t enough, there are rumours of an ancient, evil superpower, who wishes to make a comeback.

Will the magnificent seven succeed or go down in a blaze of glory? So, it begins…
Available on Amazon Goodreads

“For fast of Transformers, Power Rangers, the Fantastic Four and the like”


An entertaining read that has a real superhero vibe to it. Seven teens are offered a job in security. A job unlike any other – the security of Earth and their Big Boss is God. Nice diverse range of characters from the aloof to the slightly sociopathic, psychopathic. Watch as they get a crash course in working as a team, using new powers, coping with spirit animals and getting to know the supernaturals that inhabit the world. From zombies to demons with a side of angels. Can they all come together and win against Mr Big Bad the actual counterpart to God?