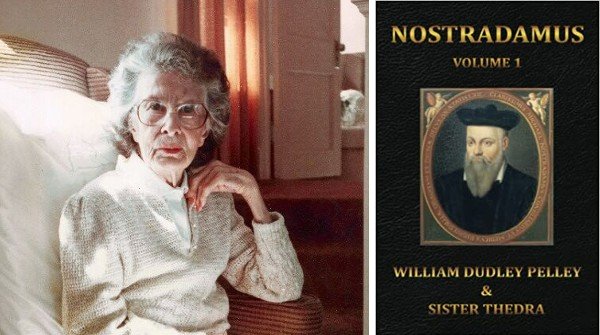 This series of books entitled “Nostradamus” is a publication of William Dudley Pelley’s original “Soulcraft Fellowship, Letters from Home, The Nine O’clock Sessions, Survey of Probabilities, Purposes of the Infinite, Letters from the Heavenly Home and Halls of Light Illumination” representing over 1500 legal-sized, single-spaced typewritten pages originally written in 1955 but never published in its entirety before now.

This material, thought to be unique in Pelley’s writings, was channelled by him and mailed weekly to his subscribers in five-page sets. One unknown individual in Washington State assembled these sets (minus issue #1) and bound them into the manuscripts. We at TNT Publishing obtained the manuscripts, digitized them and are publishing them herein, beginning with Letter Number 2.

While the majority of this material was received psychically from Nostradamus, other Steller historical personalities also “tuned in” to provide (absolutely awesome!) knowledge and valuable communication while Pelley was in contact with Nostradamus, Democritus, Henry Ford, Benjamin
Franklin, Thomas Edison and others…