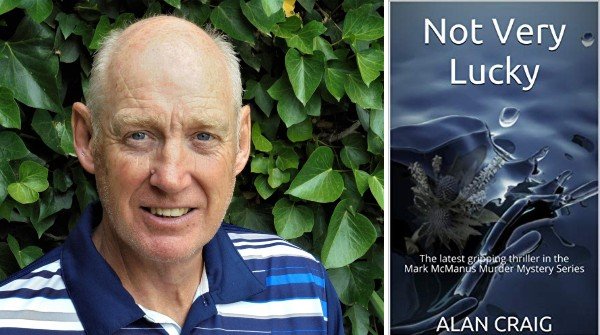 The Major Investigation Team of Police Scotland ‘P’ Division is called in to assist when the son of two prominent doctors goes missing only weeks before his wedding.

DI Mark McManus teams up again with DC Gill Edwards to reluctantly investigate, after all it’s not what the MIT was designed for, and it’s way beneath his pay grade. But when the missing man’s car turns up in the murky water of a flooded quarry their interest is heightened. Especially when the car is eventually dragged from the depths.

Is it a murder? A suicide? Or an accident? Was this a lovers’ quarrel gone wrong? And where is his fiancée?

There are more questions than answers and when it comes to light that the fiancée and her friend spent the weekend at a party in her drug-dealing brother’s house, then things take a more sinister turn. The body count grows as Edwards and McManus battle each other, and neither can forget the secrets they hold over each other from their last murder case. As well as their shared dark past, they also share growing concerns that all is not as it seems in the housing schemes of Cowdenbeath.

The events at the party become the focus of attention as one after another of those involved turn up dead. Once again the questions have to be asked. Is it a murder, suicide or an accident?

McManus takes us on a journey through this, at times intense, investigation, uncovering secret after secret as he goes along. But his frustrations start to show as his boss gets involved, more concerned about his budgets than solving crime, and tries to steer the case to an early conclusion.

With other ideas, McManus pursues the investigation in his own style, but his unorthodox ways lead to confrontation with command and threatens his whole career. His affairs with married women don’t help either, and his pursuit of pleasure crosses with his job, and pushes him further down the track of his private pursuit of a corrupt senior officer

I appreciate Alan has had what he describes as "a short police career" but it's a pleasure to read a cop based book where the author doesn't get bogged down with authentic procedure, or have uniformed officers calling tuppence ha'penny Det. Sgts. "Sir". Plenty of action, a good bit of humour and the storey romps along. If you've read Alan's first book..Not Very PC..expect more of the same. Sure, there's a bit of sex throughout, but it's not graphic stuff by any means, and I think the book's better for it. (Oh..and if anyone is thinking the saucy stuff just doesn't happen in the police, trust me it does...on a grand scale. I did that job for 30yrs..happy days.

Alan Craig is the author of the Mark McManus Murder Mystery series of crime fiction novels. The first book in the series, Not Very PC, was released on Amazon in paperback and Kindle format in June 2018. Book 2 in the series was completed during the Coronavirus lockdown in Spain in March and April 2020. Not Very Lucky is available on pre-order for paperback and kindle format publication on 12th June 2020 Born in Kirkcaldy, Fife, Alan was educated at Kirkcaldy High School and St Andrews University. All of his working life was spent in Scotland, including a short career as a Police Officer with Fife Constabulary in the late 1970s and 80s. A career change to concentrate on finance and investments led to Alan retiring early to live most of the year in the Alicante region of Spain. Now spending much of his time relaxing, reading or writing crime fiction, and playing golf, Alan enjoys his life in the sunshine with his wife and two rescue cats. You can connect with him on Twitter @AlanCraigAuthor or at www.alancarigauthor.com

Is it a murder? A suicide? Or an accident? Was this a lovers’ quarrel gone wrong? And where is his fiancée?

Dear Reader, author’s recently published book “Not Very Lucky” is now available on leading bookstores, get your copy now and help the author by writing a review of the book.
Available on Amazon