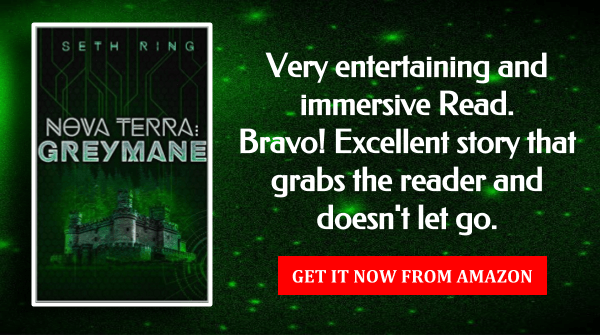 Betrayed and left for dead by his team, Thorn learned the hard way that the game world of Nova Terra is not all sunshine and roses. Stripped of his destiny, Thorn refuses to let what happened to him control his fate. But, betrayed once, can he really trust the people around him?

His encounter with an ancient evil and a forgotten God has set him on the path of a ruler and on a crash course with one of the most powerful guilds in the game. He’ll need all the strength, cunning, and courage he can muster if he wants to come out on top.

Join Thorn as he continues his adventures in Nova Terra, learning more about himself and the world around him.

Nova Terra, your dreams, your world.
Available on Amazon Goodreads

Five Star Review on Amazon by


No spoilers will be given here but I want to say what a relief it is to read a kindle book with a good story with strong characters, solid grammer, and intreging plot lines. There were a few typos but they didn’t detract much from the story; shoot, I read the whole book in one sitting. New readers, make sure to read book 1 first since the author doesn’t waste many words on useless recapping of what happened in book 1 (and rightly so, it is a series folks, so read the books in order and you can follow the storylines just fine). Anyway, the action in book 2 picks up the storyline about a month after the events concluding book 1. Now go read the book and enjoy.
Excellent job Mr. Ring. Looking forward to book 3.

Growing up traveling between the USA and Ghana, West Africa, books were Seth’s constant companions. As he grew, so to did his imagination. To vent his thoughts and ideas, Seth would spend hours telling his fantastical tales of heroes and villains, of magic, technology, and skill. This eventually morphed into a love of games and story-telling that has continued to this day. Eventually, Seth thought it would be a good idea to write some of his stories down since he was running out of room in his head. Seth Ring currently lives with his wife and kids in the United States of America.