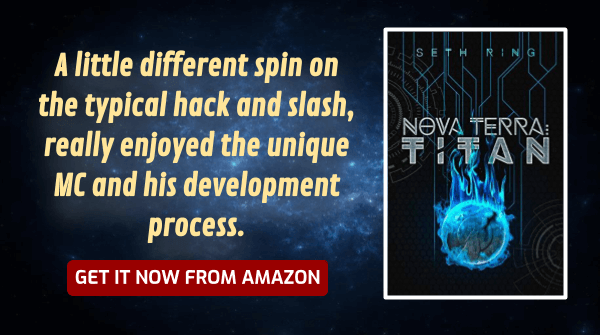 Trapped in his own body by a debilitating medical condition, Xavier Lee seeks reprieve from his giant-sized problems through full immersion into the game world of Nova Terra. Billed as the first true alternate reality, Nova Terra runs parallel to the real world and promises to fulfill the fantasies and desires of those who dare plunge into its mysterious depths. In order to adjust to his new life of quests, skill mastery, and magic, Xavier will have to forget everything he knows. As he struggles to make the most of his new-found freedom, Xavier will have to learn to deal with a new body, new friends, and a new world that is much more than it seems.

Nova Terra, your dreams, your world.
Available on Amazon Goodreads

No seriously, I thoroughly enjoyed this work by Seth Ring. In many ways, I would count this among my favorites, and have high hopes for future works from Seth Ring. Well crafted story line with a main character that doesn’t really pity himself, but has a drive and willpower to overcome adversity; yet, you still see glimpses of a vulnerable side to the character. The author presents a flawed person as your main character who’s character is not overshadowed by self-consciousness, personal ailments, or flaws, but by an incredible drive and willpower. While in some senses you start with a somewhat traditional element(at least not an unusual element) of a wealthy person with health issues, you are still presented with someone that has a strong sense of self…a solid foundation in moral principles despite the adversity. While not unique, it is very good to see, and well written in this case.

Definite must read, and definite author to follow in the genre for future works.

Growing up traveling between the USA and Ghana, West Africa, books were Seth’s constant companions. As he grew, so to did his imagination. To vent his thoughts and ideas, Seth would spend hours telling his fantastical tales of heroes and villains, of magic, technology, and skill. This eventually morphed into a love of games and story-telling that has continued to this day. Eventually, Seth thought it would be a good idea to write some of his stories down since he was running out of room in his head. Seth Ring currently lives with his wife and kids in the United States of America.