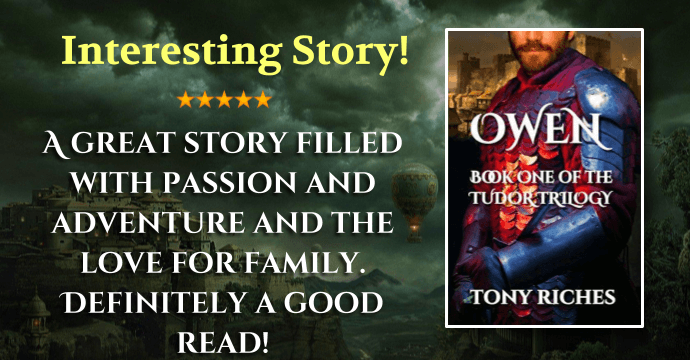 Based on the true story of a forgotten hero, OWEN is the epic tale of one young man’s incredible courage and resilience as he changes the course of English history.

England 1422: Owen Tudor, a Welsh servant, waits in Windsor Castle to meet his new mistress, the beautiful and lonely Queen Catherine of Valois, widow of the warrior king, Henry V. Her infant son is crowned King of England and France, and while the country simmers on the brink of civil war, Owen becomes her protector.

They fall in love, risking Owen’s life and Queen Catherine’s reputation—but how do they found the dynasty which changes British history – the Tudors?

Owen – Book One of the Tudor Trilogy is a new addition to story of the Tudors in the historical fiction tradition of C J Sansom, Conn Iggulden, Philippa Gregory and Hilary Mantel.
Available on Amazon Barnes & Noble Goodreads

“The Servant who Married a Queen and Fathered a Royal Dynasty.”


Catherine of Valois was a prize of war. After Henry V of England defeated the French in the famous battle of Agincourt, part of the peace settlement was that the daughter of the French King Charles VI would marry Henry. The marriage between the English King and the French princess was short-lived because he died of the flux in 1422, leaving Catherine with and infant son.
Owain ap Maredydd ap Tudur , whose name was anglicized to Owen Tudor, was the disenfranchised son of a Welsh nobleman. Having lost his patrimony, he became a soldier of fortune and fought with King Henry’s bowman in France. After Henry’s death he became a retainer in the dowager Queen’s household, the master of her wardrobe, charged, essentially with running the household.
The story is told from the point of view of Owen, who, despite a dalliance with the Queen’s maid Juliette, falls deeply in love with the Queen. Once the young Prince Henry is removed from the household to undertake his training for the Kingship, Catherine takes notice of the devoted Owen and begins to return his affection. They marry in secret and set up household in Much Hadam, a quiet village some forty miles north of London. They know that their marriage will not be approved by Sir Humphrey and Sir Beaufort, the advisors of the young King, and they endeavor to keep the marriage secret as long as possible. During the years of their marriage, Catherine gives birth to three sons, but she dies in childbirth after giving birth to a daughter. The baby dies after a week. By this time their marriage has been discovered by the Prince’s counselors and Owen is in big trouble.
After a stint in Newgate Prison, Owen is released thanks to the mercy of the young King. Eventually Owen’s sons, Edmund and Jasper become favorites of the King, who is, after all their half-brother. Edmund marries Margaret Beaufort and they give Owen a grandson, Henry. There is a cloud on the horizon as the Richard, the Duke of York is determined to wrest the throne of England from the feckless King, Henry VI. Owen’s sons attempt to reconcile the factions but are finally forced to support their half- brother the King in a bitter and prolonged civil war.
Tony Riches has written a fascinating account of a troubled period in English history and a sympathetic portrait of a romantic relationship between two people of very unequal rank which would spawn a dynasty.

Tony Riches is a full-time writer and lives with his wife in Pembrokeshire, West Wales. A specialist in the history of the early Tudors, he is best known for his Tudor Trilogy. Tony’s other international best sellers include ‘Warwick ~ The Man Behind the Wars of the Roses’ and ‘The Secret Diary of Eleanor Cobham’.