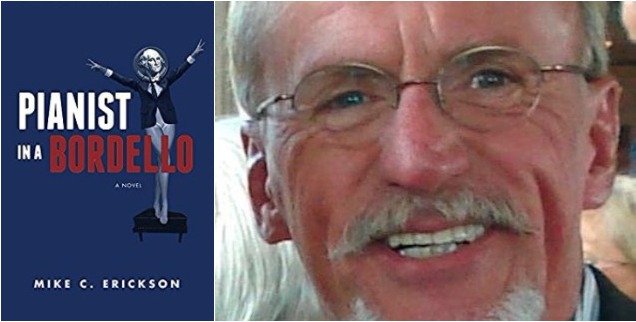 Pianist in a Bordello

What would happen if a politician decided to tell the truth—the whole truth?
Richard Youngblood, aspiring Congressman, is about to find out. He’s running on a platform of honesty and transparency—and against the advice of his friends and advisers he’s decided to start with himself. His autobiography will lay his entire life bare before voters just days before the election.
And what a life he’s had. Born in a commune and named Richard Milhous Nixon Youngblood as an angry shot at his absent father, Richard grows up in the spotlight, the son of an enigmatic fugitive and the grandson of a Republican senator. He’s kidnapped and rescued, kicked out of college for a prank involving turkeys, arrested in Hawaii while trying to deliver secrets to the CIA…Dick Nixon Youngblood’s ready to tell all.
He’ll even tell his readers about the Amandas—three women who share a name but not much else, and who each have helped shape and define the man he’s become.
Are voters really ready for the whole truth?
Are you?
Pianist in a Bordello is a hilarious political romp through the last four decades of American history, from a narrator who is full of surprises.
Available on Amazon

This is one of the best books I’ve read in the past year — very engaging, funny, and educational. It really hits its stride about 1/3 of the way through and keeps your attention until the very end. I found myself staying up late each night simply because I couldn’t put it down. I was sincerely impressed that this was the author’s first novel — would look forward to reading more!

Mike C. Erickson grew up in the idyllic college town of Logan, Utah, but because of a twist of fate he graduated from high school in Honolulu. He left Hawaii brimming with aloha and enrolled at Utah State, where he was awarded two degrees and self-proclaimed minor intellectual status, which was of dubious value when the US Army invited him to vacation in South-East Asia. Ten days after leaving Vietnam, he began decades of dispensing pearls of wisdom as a high school history teacher, academic decathlon coach, and on occasion, as a community college instructor in the Sacramento area. Mike and his wife Trudy, have two grown sons and a grandson born soon after this novel is published. When not in Hawaii or another exotic locale, they live in Gold River, California. This is his first novel.

The award winning novel, Pianist in a Bordello, garnered a nod by the Northern California Publishers and Authors for third place in General Fiction. It was also awarded two first places in fiction and humor by the Colorado Independent Publishers Association. In addition, PIAB was re named as a recipient of the coveted BRAG awards. Publishers Weekly, Red City Reviews and Kirkus Reviews all included it in the top ten percent of Indie books that were submitted. The gold standard of book promotion, BookBub recently accepted Pianist in a Bordello for a featured position in their newsletter. BookBub only accepts between ten to fifteen percent of the hundreds of books submitted daily. Pianist in a Bordello was top pick and finalist for Underground Book Reviews, Novel of the Year.