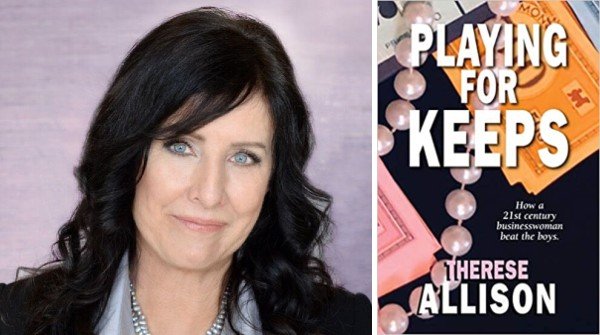 THERESE ALLISON, A GROUNDBREAKING PIONEER OF EXECUTIVE WOMEN, SHARES HER SIXTEEN PEARLS OF WISDOM THAT SHE USED OVER 35 YEARS OF BUSINESS AND LIFE – WHICH ANY PERSON CAN ADOPT TO ACHIEVE SUCCESS.All her life, Therese Allison wanted to beat the boys – from the playground to the boardroom. She became the first female producing Partner in an insurance brokerage company tied to Lloyd’s of London where, for 300 years, women weren’t allowed on the underwriting floor. In Playing for Keeps, Ms. Allison shares her pearls of wisdom that created the framework for success, not only for her, but for her children. After mentoring her son to become one of the youngest Principals in a multi-billion company headquartered in New York, Ms. Allison now shares her wisdom with the world. With authenticity and humor, she also recounts her adventures and misadventures during her travels around globe as her “Lucy Moments.” In 1992, her father, Gould Allison, started researching their family history. After his passing, Therese discovered their blue-blood business pedigree—from pioneer ancestors who settled California during the Gold Rush, to her grandfather who rivaled William Mulholland in the race for L.A. water, to Winston Churchill and a connection to Abraham Lincoln. In discovering her heritage, she finally understood her drive to succeed… and she found her community. As a woman at the highest levels in business, Therese blazed new trails and conquered her own frontier. Like her ancestors before her, she saw the impossible become possible—and now she’s sharing her pearls of wisdom with you.