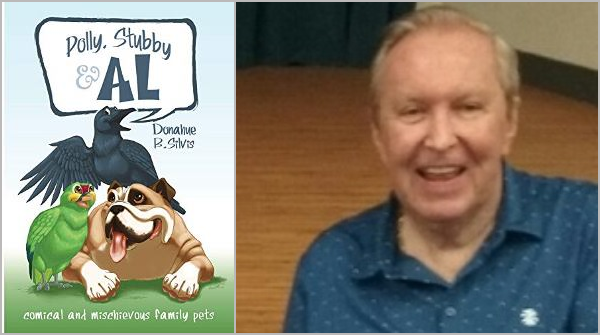 It is an illustrated children’s reader. Ages 4-11. A great book to read to younger children, and for those who’ve learned to read.
A family lives in a small community called Wolfe Lake. The family has two pets, Polly, a multi-colored talking parrot, and Stubby a tan-colored, bowlegged English bulldog. Daddy Ben owns a small landscaping business. Mama Sara is a housewife and animal lover. One day, Mama Sara, Megan, Katie, and Stubby are walking in the woods when they see an injured black crow lying on the ground. Mama Sara picks up the crow, takes him home and nurse’s him back to health. When healed and released back into the wild, the black crow flies back to their home, choosing to remain with the family. They name him Al and he becomes one of their family pets.
Over the years the family had become used to Polly’s chatter, but a week later they’re amazed when Al speaks. From then on their everyday life took on an abrupt and hilarious change. From that day forward nothing is the same in the Donovan household, as Al becomes a funny and mischievous character. Then one sunny day, while flying in the sky, Al is caught in a sudden storm. The sky turns black, bolts of lightning are flashing, there are strong winds and heavy rain. Over and over Al desperately calls for help, “Mama, Mama.” They watch as Al is tossed in the wind and blown toward the nearby dense forest. Getting into daddy Ben’s pickup, they follow after their wind-blown pet. However, the family is helpless as they look up into the darkened sky and watch Al’s plight. Does Al survive? Do they ever see their pet crow again?
Available on Amazon Barnes & Noble Kobo Goodreads