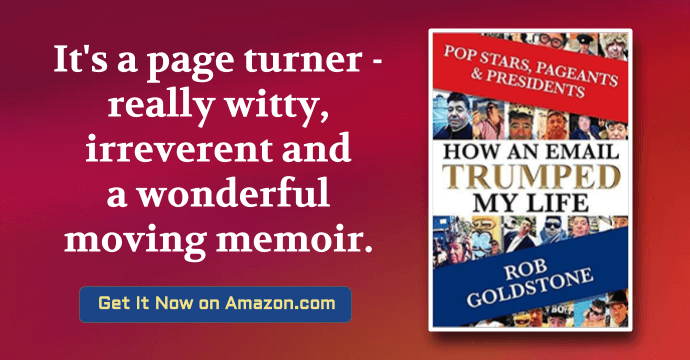 Pop Stars, Pageants & Presidents: How an Email Trumped My Life is a firsthand account of the extraordinary life of British-born music publicist Rob Goldstone who found himself at the center of the RussiaGate investigation after an email he wrote to Donald Trump Jr. became public. From Manchester to Manhattan to Moscow, this very personal memoir takes the reader through Goldstone’s early days in the North of England to his life as celebrity journalist and pop music publicist to a world of billionaires, Russian oligarchs and Donald Trump. Pop Stars, Pageants & Presidents takes a close look at what led Goldstone to write the now infamous Trump Tower email, an email that would become worldwide news and a turning point in the investigation into Russian collusion and interference in the 2016 U.S. election. Journey with Rob as he escorts Donald Trump around Moscow during the 2013 Miss Universe pageant, and then take an inside look at what really went on inside the Trump Tower meeting between a Russian lawyer, Jared Kushner, Paul Manafort and the president’s son.
Available on Amazon Barnes & Noble Kobo Goodreads


I admit, I was dying to know all about the email and the meeting so I was a little surprised to find out that it’s more than that. It’s also stories about other things he’s done but it’s a pretty interesting life. And it’s fun to read about his experiences with various celebrities. I enjoyed the read, it’s engaging and even fun in places which made it a good read. And I did get to learn about the email and meeting from his side so that was cool.

Born in the UK, Rob studied as a journalist and by his early 20’s worked for a string of daily newspapers and radio stations, including Independent Radio News (IRN/LBC), BRMB Radio, Birmingham Post. In 1986, Rob relocated to Sydney to work for the Australian Associated Press where he concentrated on news and entertainment. In 1989, he traveled traveled with Michael Jackson on his 1989 Australian BAD tour, gaining an exclusive insight into the life of this reclusive pop star.

After returning to England in 1991, Rob was tapped by HMV Group to head up its international marketing division, and in that position oversaw global marketing for the world’s largest music retail company in territories including Canada, the UK, Ireland, Germany, Japan, and Australia. In 1992, Rob moved to the United States where he became HMV’s Vice President of US Marketing.

In 2012, Goldstone began representing Russian pop star Emin as his worldwide manager. Rob was instrumental in helping bring the 2013 Miss Universe to Moscow, where Emin also performed to an international viewing audience of over a billion people. Other notable achievement with Emin during this time include a performance the Winter Olympics, performing and winning a World Music Award in Monte Carlo, a partnership with music royalty Nile Rogers for the single “Boomerang” which hit #5 on one of Billboard’s dance charts. In 2016, Rob secured the PBS special concert: Emin Live from Russia with David Foster which was followed by a sold out American tour capped off with a standing-room only performance at Manhattan’s Lincoln Center.

Rob’s debut book, Pop Stars, Pageants & Presidents: How an Email Trumped My Life, details how he found himself caught up in the RussiaGate investigation. The book’s release date is September 25, 2018.