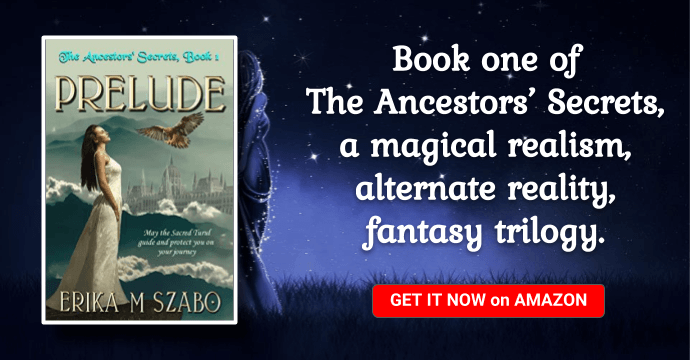 Book one of The Ancestors’ Secrets, a magical realism, alternate reality, fantasy trilogy.
When a young doctor, Ilona, starts to develop unusual powers, her life and her beliefs change. Thrown into a world of clan mysteries, traditions and secrets, she begins remembering her mother’s instructions concealed as rhymes.
Punished by the ancestors long ago, Mora has waited centuries for the chance to reunite with her beloved Joland. Now, she seeks to gain the power to rule the ancient clan with a strict hierarchy and deadly laws that still exist hidden among us.
Ilona has been chosen by the ancestors to stop Mora and save the future of the clan.
Her birthright as a Healer runs alongside her desires as a woman. She has been in love with her best friend but is also drawn to the stranger who appears in her peculiar dream.
Ilona must save herself and her family from Mora’s evil plans, uncover ancient tribal secrets, and find her Destiny Box… the box that contains the message of the Ancestors.
Does she have the strength to fight evil?

EDITORIAL REVIEW
I was very pleased to read this Fantasy novel because it is much more aligned to my taste in such books, namely real people living in our world, but gifted with special ‘magical’ powers. The first sentences already grabbed my fascination, and the easy flow of the entire book continually held my interest and curiosity. The author has skillfully let the main characters talk in the form of diary entries, and with natural dialogue and careful descriptions of thoughts and feelings, the reader soon feels intimately acquainted with them.
Particularly interesting is the fact that many aspects of this story are based on fact and history, namely the Huns who lived in Eastern Europe some 1500 years ago. It is therefore not too hard to believe that ancient traditions and secret rites could have continued down to our time. The main character, Ilona, is a young doctor educated in the modern world who at first struggles to comprehend the depth and power of her heritage when she ‘becomes of age’ at 29. Fascinating and fun to read is the way she discovers her special healing abilities and in particular, the way she can slow time around her. Even more intriguing is her handsome love interest, Zoltan, who can time-travel, but always within limitations and ancient law.
This first book in the series has been cleverly woven with various threads that continue into future books, and needless to say, I can hardly wait to read the next book and find out which man is Ilona’s true love, what her ultimate great destiny is, and what menace is still pursuing her with evil intentions. This is a book I can recommend to anyone interested in this kind of historic fantasy involving ancient traditions and down-to-earth characters of our own world.
~ Barbara Underwood
Available on Amazon Barnes & Noble Kobo Goodreads

Erika lives in New York and when her daughter moved out of the family nest, she started writing. Erika writes magical realism, fantasy novels as well as fun, educational and bilingual books for children 2-14 about acceptance, friendship, family, and moral values such as accepting people with disabilities, dealing with bullies, and not judging others before getting to know them.
http://www.authorerikamszabo.com