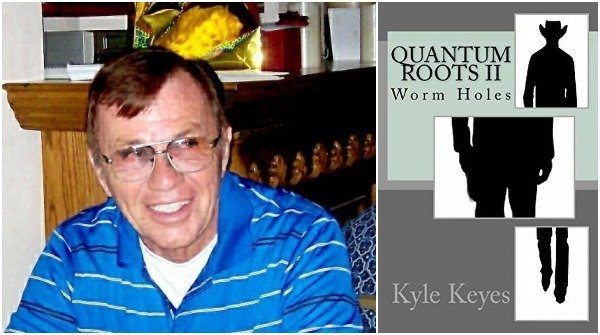 In this sequel to Quantum Roots, the meekish Olan Chapman faces danger as vigilante Samuel Leroy McCoy, a US deputy marshal who upheld law and order in 1876, Dodge City.
The metamorphous holds an eerie transformation, cloaked with rolling sagebrush and horse whinnies from yesteryear, which causes DPA Director, Alexis Grumman to rethink the validity of worm holes.
“Creation is a worm hole,” replies Dr Norman Daly, “Atoms require hadrons to form a nucleus, and each hadron comes through it’s own worm hole. Two quarks form the bi-dimensional plane needed to support the hole. The remaining quark squeezes through this hole, after which the first two quarks follow to shape the hadron to a given genetic, road map. The hole then closes to divide time from timeless.”
The gunfighter is wanted for multiple killings, a consequence that keeps the slender computer wizard on the run from authorities, and domineering wife, Ivy Chapman.
As in the Vigilante Sightings, Quantum Roots II is based on mounting evidence that people form from recycled energy.