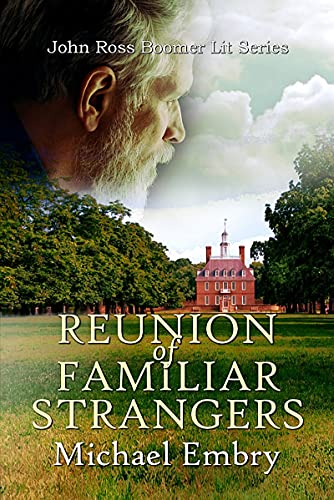 Reunion of Familiar Stranger ⋅ September 11, 2021, ⋅ Reunion of Familiar Strangers History stays the same events are recorded and memories are forever but after you join John Ross and Sally at his 50th high school reunion you decide if all memories should remain or be hidden away . Before leaving Sally’s mother needs to have help caring fit herself and when her son and his wife arrive sparks fly, and things get tense, but John is a great handling confrontation and diffusing them. The reunion is set, and all events timed and organized but when you meet the attendees you won’t believe the mix of people. Personalities clash tensions rise, and Sally gets an awakening into John’s past meeting women that still seem attracted to him, men that are judgmental and one downright rude, crass and rude. Meet and greets , food not up to some standards and you will fall in love with Ben, Lenny Cindy and even Virgie. The conversations get heated at times and even the attitudes about partner selections or what people think about Virgie and others spills over to the present. Prejudicial issues, race issues and even appearances get criticized as each member of the class has his/her own viewpoints and they do not hesitate to voice them. Some are not retired; John relates his background in the military as others do plus his writing career. One still has a small construction company another a minister named Tyrone who does group prayers. Meet Dewey , Burgess, Pamela and Mildred who were there some talking politics and others who will attend the picnic . Grover is a colorful character with a checkered past and in the present he’s still crass, a bully and more. Barrett has opinions about everyone and John and Sally talking about getting older. Wayne and his companion are interesting when you learn about their relationship and opinions about how this event was organized vary. Talking about health, healthcare and sharing their sage lessons from life are all part of the discussions at this reunion . Biff embarrassing Roland about his Playboy magazines and attitudes about R rated movies plus Sally Asked John is he ever had close friends in high school and the conversation gets interesting and the answers you won’t expect. Sally responded by saying she had two but have not stayed in touch. Grover was the topic of the next conversation but what is revealed about him dies shake some of the group to the core. He was a bully, did several outrageous things at the reunion but something happens that changed it all. Every so often Sally does call home to inquire about her mother who is opinionated, judgmental and at times unyielding. Added in in the final page’s discussions centered around their children, grandchildren and more about John Toss and his past. Then Barrett asks John about Ben and learning he had a good time thanks to John who drove him there and took care of his medical and physical needs as well as helping Lenny when his car battery died. The ending was unexpected and the final farewell to John not what he thought would ever happen, but someone waited 50 years to do it. Did he have fun well you have to read it and judge it for yourself. He saw people that he has not seen in 50 years and have like everyone grown and gone through different stages in their lives. He made friends acquaintances through course of his life and the ones made in recent years more important. His dearest friends are the ones he has now. Did he think if there was another one in five years would he come? Why did he wish he had more time to say goodbye to a few more? Read the last page and last paragraph it says it all. Some endings are reminders of old beginnings and this one brings it all beauty and wonders of the present as John will forever remember the Reunion of Familiar Strangers. But something tells me this is far from the end of the road for him and Sally as we hope to learn what happens with Brody, Chloe and Whitney. Throughout the novel we learn about the many friendships from the past that John will either remember in the future or choose to forget. Lives are different. people change and others remain the same as John and Sally learn a lot about each other and their love will it get stronger? Wishing that the goodbyes were longer and having missed some that he would have liked to say. Added in the sadness at the end and the death of someone in the group, plus the harsh words that were revealed, how the lives moved ahead and yet some staying the same. Humor added and someone they met in the last novel a couple comes to visit thank goodness Geraldine is leery and did not give away where they were. Have we seen the last of John Ross? What about Brody and will Geraldine stay with them forever? Lives change, people change while other remain stagnant so take the journey along with Sally and John and his fellow classmates and you decide whether you would enjoy the same Reunion of Familiar Strangers. The title says it all. 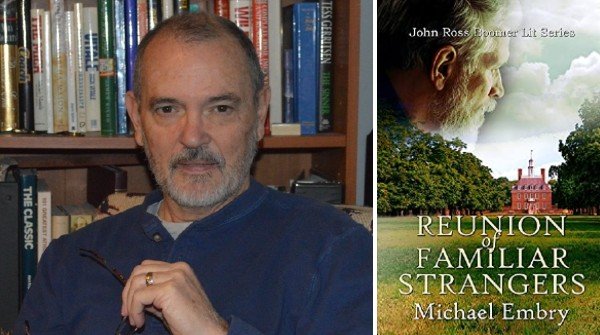 Baby boomer John Ross is out of excuses for skipping his 50th high school class reunion that his daughter has arranged for him to attend as a gift. So it’s off to a gathering of Riley High School seniors from the class of 1968. John and his wife Sally experience a long weekend of weird encounters that include flirtation, fighting, and flashbacks from the past.

Michael Embry spent more than 30 years as an award-winning journalist, working for Kentucky newspapers in Madisonville and Lexington; a national news service with stops in New York, Milwaukee, Lexington, and Louisville; and as editor of Kentucky Monthly magazine. He is now a full-time writer and his latest novel, “Reunion of Familiar Strangers,” was published Sept. 1, 2021. It is the fifth installment in the John Ross Boomer Lit series, the sequel to “Make Room for Family.” The first book in the series is “Old Ways and New Days,” followed by *Darkness Beyond the Light” and “New Horizons.” “Old Ways and New Days” was a finalist in the EPIC fiction of the year in 2016. He is currently working on the second volume of short stories, targeted for publication in 2022. A short story was recently included in the “From Pen to Paper” anthology, published in October 2019. Embry graduated from Eastern Kentucky University with a journalism degree. He also has 45 hours of graduate work in special education. He has written three non-fiction sportsbooks (as Mike Embry), 11 novels, and a short-story collection. His novels include two for young adults, “The Bully List” and “Shooting Star;” a murder mystery, “A Confidential Man;” and contemporary mainstream “Foolish Is The Heart,” “A Long Highway,” and “The Touch.” His short-story collection, “Laments,” is available on Kindle for 99 cents. The John Ross Boomer Lit series are mainstream coming-of-old-age novels about a recently retired sports editor who discovers changes in his life and that he must change some of his ways of doing things. If you order and read it, please leave a rating and review (hey, do that for every author you read. We appreciate it!) Embry, who is listed in Who’s Who in America, has served as a judge in the Kentucky Literary Awards competition. He is also a former member of the National Sportscasters and Sportswriters Association and U.S. Basketball Writers Association. He served as marketing chair on the executive board of the Kentucky Book Fair for six years. He’s an advocate for libraries and is a member of Friends of Kentucky Libraries and Authors for Libraries. Embry lives with his wife, Mary, and Chorkie dogs, Bailey and Belle, in Frankfort, Ky.
Dear Reader, author’s recently published book “Reunion of Familiar Strangers” is now available on leading bookstores, get your copy now and help the author by writing a review of the book.
Available on Amazon