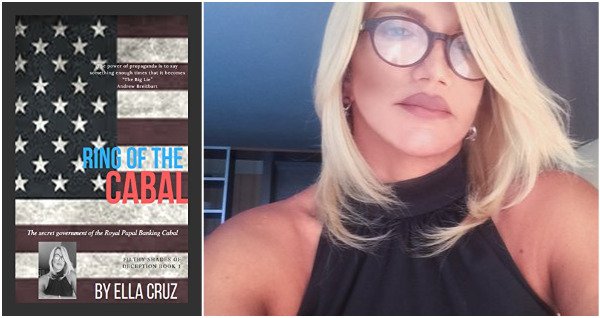 Why are we dealing with unnecessary issues like Transagenda, White Supremacy, Feminism, Dissolving borders and etc. which were nonexistent before 2001?
How come a 7 years old boy decides to change sex instead of asking his mother to buy him an ice cream? How possibly women manage an aggressive TV add during which they smash a cup of coffee into the boss’s head and claim they demand MORE while the boss’s forehead is bleeding on public TV? How did we get here to we see a Hollywood star eating human flesh and drinking blood on a family TV series? How come child trafficking has become the bottom of every hole we dig in?

There is a vehicle of destruction destroying our world, humanity and our ways of life and it is aimed to turn us into slaves for some self-claimed entitled criminal elites.

THE RING is a blueprint to unmask the cabal and their filthy deception which are taking us towards the “animal farm style”, “papers please” state and enslavement of humanity. This book unmasks the identity of a RING of individuals and the ROYAL PAPAL BANKING CABAL’S deep state and exposes their crimes, the pattern and the techniques.
THE RING, reveals “what who why how”.

The “bloodline”, created, supported, financed every major crime including child and drug trafficking. The bloodline created both “left partisan communism and Islamic terrorism” as Geo-Political weapon and proxy army to push their crime network and manufactured the “climate change hoax” as a cash pot to fund it. The Nazi bloodline in high offices now with all their falsehood, deception and duplicity targets the patriots in any country as Nazis.

THE RING is a revelation, a self-empowerment prescription, a mind sharpening tool and a strategy to fight.
Enough of warnings and no strategy. Enough of leaving all to the corrupt politicians who just do the honor of standing between us and what we want. Time to stop the Cabal and their Lilliputian goons and minions and put an end on our fake melodrama of being ok. Nothing is ok.

We don’t want a Geo-engineered world in a bubble of collective hysteria made by lame stream media who are not journalists but Democrat Activists working for the polarized deep state to keep people by default in a cardiac arrest mood every second and it is our responsibility to fight to the bone telling people what they don’t and it is the matter of now or never.

Look into Hitler’s legacy. He always believed to be the real fulfillment of Marxism and advocated for institutional crucification of free speech. Black masks and hoodies of domestic terrorism by thugs in street riots called “protests”, hide nothing but Hitlerian Marxism.

Our old values have been removed from the society brick by brick and each brick is replaced by depravity. People became less merciful and compassion was swept out. Faith became ridiculous. More intellectual, less God.

Christian, Jewish, moderate Muslims, Buddhist or whatever, we have to come together and fight the deep state. We have to drop sticking our nose into each other’s back ground if we want to fight alongside each other. It’s time to see humanity not race. Praise humanity not gender. Gratify humanity not just being on your side. This is a cry for humanity and a cry for God which are attacked by false modernism. Act just the same as when we act after an earthquake, a tsunami or a disaster when we forget anything but humanity and God. A disaster destroys part of the world but the disaster we are living now is a beast swallowing the whole world. We need “Army of God” (as Mark taylor coined the phrase). Are you ready to fight?

“This is a great read, My new favorite!”

Satanism, child trafficking and cannibalism exist and they exist in most important offices. This is disturbing but real. The barbarism and cruelness of crime is so unbelievable that instead of stepping up, people prefer to bully and call us crazy.
When you decide to take an action? Read. Look what is going on. I couldn’t put it down. All major leaders we trust and see on TV on everyday basis are holding the arch of Crimes Against Humanity.
She nailed it so good when she said: “More intellectual, less God”. The insanity we see today is well connected with war on Christianity. If you look deep, Communists, Satanists, Liberals have one thing in common: They hate God.
I enjoyed reading this book very much. The language is friendly with a touch of humor while keeping it professional. I felt very close to writer’s both feelings and analysis. The horrific plot and crimes are perfectly broken up and explained while I didn’t feel tired or under pressure. I think it is a good idea if the writer manages a movie or documentary on this book. This is a great read. My new favorite. Very satisfied.