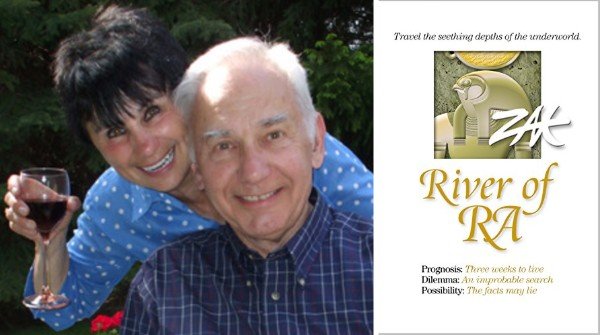 CIA secret agent Dan Martin has been dealt a shocking blow. A follow up mandatory physical has discovered that a wound inflicted in Cairo has slowly poisoned his system. He’s been told that modern medicine has nothing more to offer. The most optimistic prognosis, he has three weeks to live.
The love of his life was killed volunteering with Doctors Without Borders in Aleppo, Syria, a death he had witnessed, or so he thought. The thinnest of evidence suggests otherwise.
“River of RA” weaves a tenacious adventure of guts, greed, love, and devotion into a “today tale” with a “yesterday curse.” Dan must decide how he would spend his last days on earth, and the clock is ticking.

My career has focused on the fine art community as a watercolorist, and the marketing world as a creative designer. Yet, one of my special interests has always been to write fiction novels. Perhaps the best description of my writing would be “grab your buns” adventures. I write for enjoyment and to put the challenges of a full day behind me during those moments. My hope is that my writing gives that “energy charge” to readers of my work as well. I’d like to thank those that have taken an interest and leave a thought or comment about each story along the way. Input, either positive or negative, is important for creative growth. Yes, there are times when I have to say “ouch” after reading an opinion, but hey, you cared to respond, and I can guaranty it effects a writer’s writing process. My thoughts on the stories I have on Amazon in order: “Obsidian Obsession” was the first story to launch a serious attempt to share my work. Two books followed. “Fragile Witness” became a continuation of characters from ‘Obsidian’ wrapped in a completely new adventure. My third book, “Ghost of a Chance” brought these characters to a finale that even surprised me. For those looking for a great deal I’ve also combined all three stories into one book titled “ZAK 3 in 1 Adventure Collection.” Looking to shake things up a bit, in my fourth book titled “Death Cycle” I left the frantic aspects of dysfunctional governments and settled into the solitude of one man’s trip through the Midwest. Surely the title suggests this is no ordinary trip. As with my first three books Death Cycle spawned an idea for book 5, “Lazarus Protocol,” a blend of crime, morality, personable characters, and of course, dysfunctional government once again. This story is one of my favorites. Just sayin’. Book 6, “They That Fall,” in short, demonstrates the dilemma and worldly havoc an innocent comment by a weatherman, of all people, can cause when it accidentally goes viral across the Internet. It’s an action/adventure ride that threatens world order, while taking you places you’d never expect to go. Book 7, “The Tailored,” veers from everything I’ve written to date and thrusts us out to the year 2165. What are some of the possibilities to be faced in 2165? I think some of those “tea leaves” are already evident and predictable if we allow them to happen without a fight. I’ve attached a two-minute video of “The Tailored” to this biography. It may be a taste of what’s ahead. Enjoy! Book 8, “Derecho Roars.” Have you every noticed how many problems we face are self-inflicted? Perhaps it’s ‘free will,’ inherent in each and every one of us, that may be the culprit. Sprinkle free will with that ‘inquisitiveness gene’ and mankind has an explosive situation on its hands. Somehow we seem to be missing a ‘think before you act’ gene. “Derecho Roars” walks us into one of those ‘self inflicted’ dilemmas that may not be so far into our future. We’ve sent out the invitations into space without ever knowing who might come to the party. At first we bestow accolades on Shep Ferguson, a young dedicated NASA scientist. Then, in short order, he is singled out to take responsibility, then blame, and ultimately a frantic order to “Do something!” Shep is a good guy caught up in an out of control mindbender that could lead to … you can say it, … extinction. I’ve attached a 2.5-minute video to my author page that may demonstrate the roller coaster ride you’ll be in for when you enter this Quagmire. Enjoy! Book 9, “The Shadow Walkers” draws Dr. Brad Reagan into a world that can only be defined as the supernatural. I’ve come to think that around us at every turn we all sense something beyond ourselves; a greater power that perhaps steers our emotions, morality, and daily decisions. Does such a power walk the earth? If so does its reach envelop the universe? We first meet Dr. Reagan at his most vulnerable point as he struggles to save a life that had been rushed into the ER. And that’s the easy part. I’ve attached a short “Shadow Walkers” video to my biography to give the reader a flavor of what may be ahead. You just may find yourself looking over your shoulder more often after this tale. Well, if you’ve delved into my ramblings this far let me condense the rest of this bio by mentioning the advent of books 10, and 11. In order they are “River of RA,” a race through Iraq and the deserts of Egypt by a man that knows he has only three weeks to live; and “The Nebula Skull,” a tale that takes us to a place that just may truly exist. You’ll have to be the judge of this one. My two latest novels are “Primal Reset,” a story that sends a very wealthy deranged psycho on the time-warped discovery of the century. And “Doctor Goodevil,” a tale that confronts a powerful cartel head on while seriously questioning whether death has to be eminent. In late 2019 and into 2020 I launched two adventure stories “The Dictator’s Disciple” and “Dead Stare” that have been described as unique out of the ordinary tales. I’m always interested in hearing from my readers. Let me know if you agree.

Dan must decide how he would spend his last days on earth, and the clock is ticking.

Dear Reader, author’s recently published book “River of RA” is now available on leading bookstores, get your copy now and help the author by writing a review of the book.
Available on Amazon