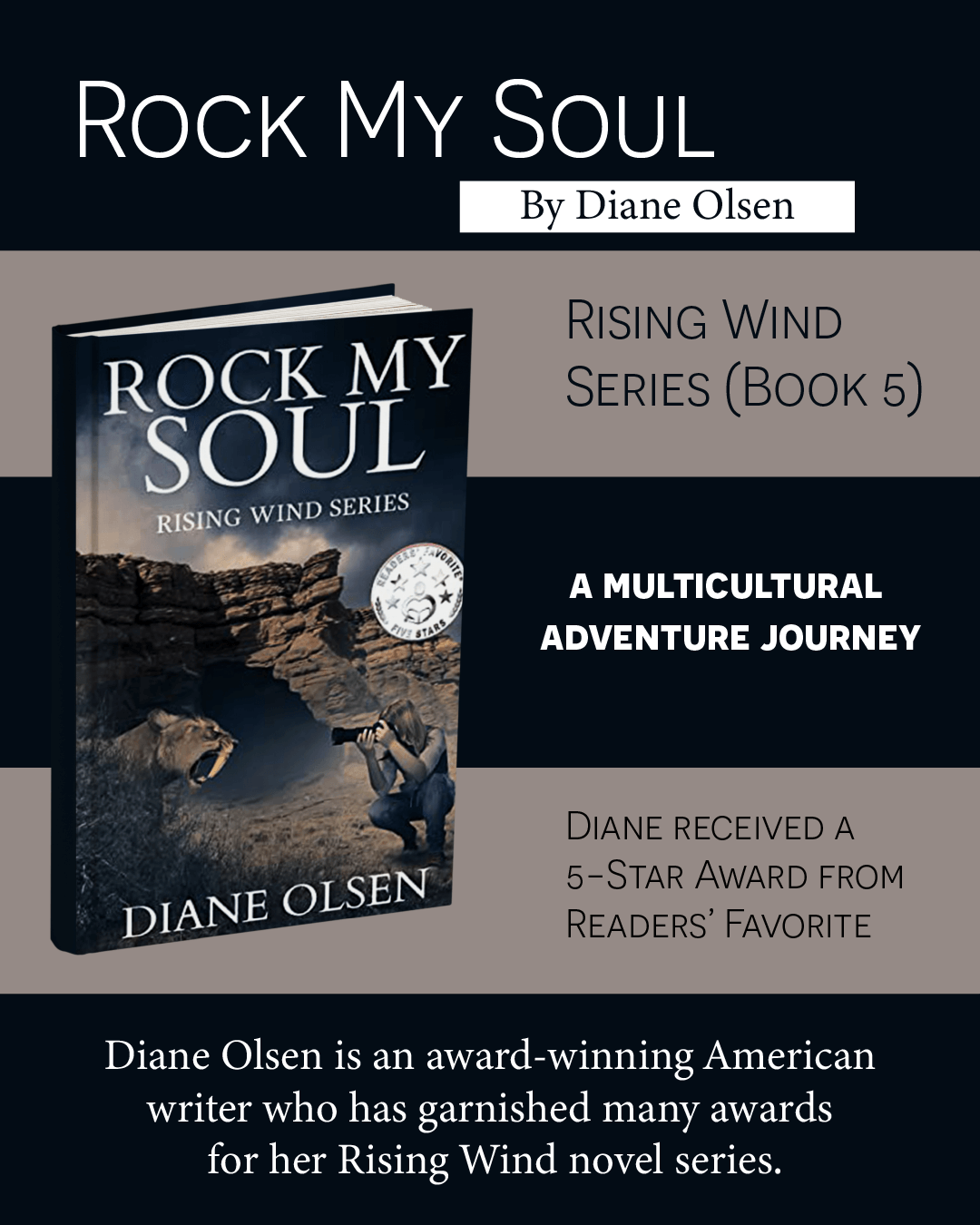 Diane Olsen is an award-winning American writer who has garnished many awards for her Rising Wind novel series.
She holds an MA in anthropology and currently lives in Washington State. This exciting series follows the adventures of Secora James, a paleontology professor as she digs into risky mysteries around the world regarding ancient religion, myths, legends, and even wildlife that are thought to be extinct. Secora is joined by her husband, Gideon Yellow Thunder, in their mysterious and often dodgy confrontations.

Recently, Diane received a 5-Star Award from Readers’ Favorite and was reviewed by Vincent Dublado, who shares these thoughts: “Diane Olsen’s Rock My Soul, the multicultural adventure journey, which features Secora and Gideon’s encounters with the many different beasts they meet along the way, most specifically a collection of Bigfoot sightings interviews… that were gleaned as they attempt to better understand this cryptid… do they conduct experiments by observing people and see if we are willing to play on their terms?

There is a strong leaning toward an exploration of myths and folklore… You can tell that a diligent amount of research went into the writing of this book based on references that Olsen has provided. These lend strength to the theme of the story, making it mystical and mesmerizing.

Rock My Soul reads like a documentary with a found-footage movie thrill in it. The first-person accounts and the brooding monster theme work well in Diane Olsen’s narrative. It feels like a slow-burn horror as you breathlessly await the outcome of Secora and Gideon’s investigations. This twisty book is definitely a must-read for anyone who is fascinated by cryptozoology.”

About the Author: Diane Olsen

Award-Winning Author Diane Olsen, a seasoned writer, began with a non-fiction book titled; “Ancient Ways: The Roots of Religion,” which won a bronze medallion from the Christian Illuminations Book Awards in 2017. Diane’s “Rising Wind” book series has also won several awards. “The Thunder Beings” was released in 2018. “Ice and Bone” and “The Weeping God and The Book of Hope” were released in mid-2021. “Weeping God” garnished her a second bronze medal win in 2021. Book four has now released in March 2022 titled “Like Feathers of a Wing: Deep, Informative and Pertinent.”

Three of these books earned five-star ratings from Reader’s Favorite, and in 2021, she received a second Bronze Medal from Christian Illumination for book three entitled; “The Weeping God and The Book of Hope.” Rising Winds is an excellent multi-cultural, cross-genre fiction read with a light Christian-themed, action-packed mystery thrill ride like no other! No matter their beliefs or cultural backgrounds, everyone will enjoy this ‘Indiana Jones style’ series, which rides a balance between science and religion. Diane shares how all of us, all of humanity, are connected as one. Her books are available on Amazon, Kindle, B&N, and many fine online bookstores.

Born and raised in Colorado, Diane is an Undergrad at Colorado State University Ft. Collins: Pre-vet med, Anthropology, then attended and received her BA and MA at the University of Montana, Missoula: Anthropology, Archaeology, and Paleontology. Diane has proudly raised two grown sons, Andrew and Gavin, has four grandsons, Dylan, Brayden, AJ, and Asher; when she is not writing, Diane enjoys spending time with her family, especially her grandkids. A few of her favorite books are ‘The Book of Certitude (Kitab-i-Iqan), The Upanishads, and The Great Initiates.’ She is currently working on the next book to her ‘Rising Wind’ series and resides in the beautiful Pacific Northwest of Washington State.