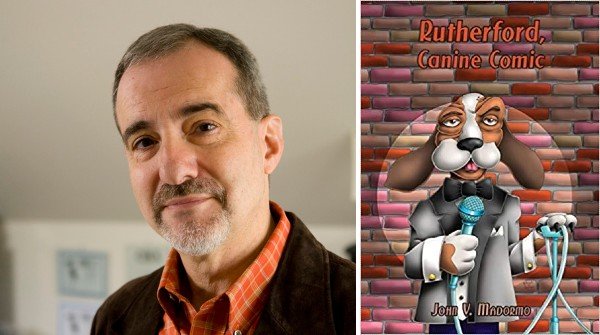 “How do you know when your dog’s been drinking from the toilet?  His breath smells…BETTER.”

Some dogs fetch sticks. Others roll over. Some even play dead. But have you ever heard of a dog who tells jokes? Meet Rutherford–a bona fide stand-up comedian.

Rutherford, Canine Comic is the first book in a middle-grade novel series told from the perspective of the title character. It features the exploits of a basset hound whose only goal in life is to become a faithful and fearless family watchdog. But when an accident with a pickup truck on a dark dirt road leaves Rutherford with two broken legs, his dreams of protecting the hearth soon fade.

Rutherford reluctantly accepts the fact that he must now find a new career–one that will pay the bills. He turns to the glitz and glamour of the stage, and a career as a stand-up comedian, a decision which unfortunately presents more than the fame and fortune he is expecting. Rutherford soon experiences a host of misadventures for which he is unprepared.