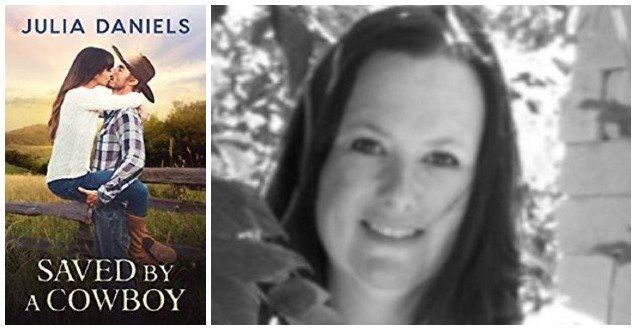 Can a city girl on the run find safety in the arms of a rancher?

Chicago restaurant owner Sabrina Marconi needs to hide. And fast. She just sent a mob boss to prison. A competition to become the cook on a cattle ranch in Nebraska might just be the safe haven this city girl is looking for. With a new name, Laura Marshall, and a new life, everything is going according to plan. Until she meets the ranch owner.

Ranch owner Caleb Kirkpatrick is a single dad with too much on his plate. The latest ranch expansion means he needs someone to cook for his men. His brother’s idea to have the cooks compete for the job might be the craziest thing he’s ever heard. Until he meets Laura, who seems to be the most unlikely candidate to be a ranch cook.

When the competition among the women gets fierce, someone decides to play dirty, and Laura’s cooking skills might not be enough. But if she doesn’t get this job, she has nowhere to go. Not to mention the growing feelings she’s having for her boss, feelings she tries to suppress.

The drama among the competing women is almost more than Caleb can handle. He’s got his hands full with missing equipment and dead cattle. But Laura isn’t like the others, and despite his best intentions, his feelings for her are growing. What is the secret she’s hiding? Will she ever trust him enough to allow them to have a future together? And will her Chicago past chase her down in rural Nebraska?

Fans of Three Rivers Ranch Romance by Liz Isaacson, Come Sundown by Nora Roberts, Wind River Wrangler by Lindsay McKenna, and Not Quite Dating by Catherine Bybee will love this contemporary romance on the ranch.

You’ll love this book if you enjoy: