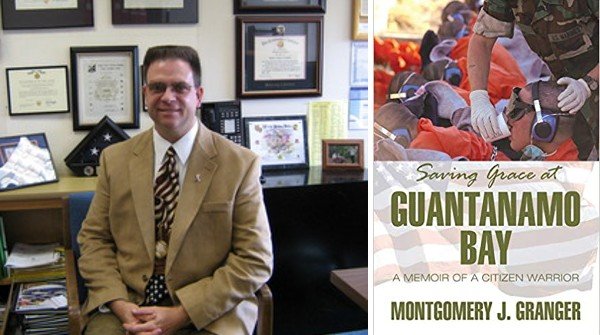 A Memoir of a Citizen Warrior

“Hard as it is to believe, one of the most significant stories of the post-9/11 age is also one of the least known-life at Gitmo, the detention facility for many of the world’s worst terrorists. Few individuals are more qualified to tell this story than Montgomery Granger, a citizen soldier, family man, dedicated educator, and Army Reserve medical officer involved in one of the most intriguing military missions of our time. Saving Grace at Guantanamo Bay is about that historic experience, and it relates not only what it was like for Granger to live and work at Gitmo, but about the sacrifices made by him and his fellow Reservists serving around the world.” Andrew Carroll, editor of the New York Times bestsellers War Letters and Behind the LinesSaving Grace at Guantanamo Bay, or “Gitmo: The Real Story,” is a “good history of medical, security, and intelligence aspects of Gitmo; also, it will be valuable for anyone assigned to a Gitmo-like facility.” Jason Wetzel, Field Historian, Office of Army Reserve HistoryU.S. Army Reserve Captain Montgomery Granger found himself the ranking Army Medical Department officer in a joint military operation like no other before it – taking care of terrorists and murderers just months after the horrors of September 11, 2001. Granger and his fellow Reservists end up running the Joint Detainee Operations Group (JDOG) at Guantanamo Bay’s infamous Camp X-Ray. In this moving memoir, Granger writes about his feelings of guilt, leaving his family and job back home, while in Guantanamo, he faces a myriad of torturous emotions and self-doubt, at once hating the inmates he is nonetheless duty bound to care for and protect. Through long distance love, and much heartache, Granger finds a way to keep his sanity and dignity. Saving Grace at Guantanamo Bay is his story.Montgomery J. Granger is a three-time mobilized U.S. Army Reserve Major (Ret.) who resides in Long Island, New York, with his wife and five children. Granger is the author of Theodore, a personal narrative published in the 2006 Random House wartime anthology, Operation Homecoming: Iraq, Afghanistan and the Home Front in the words of U.S. Troops and their Families. Publisher’s website: http://sbpra.com/MontgomeryJGranger

Reserve Major (Ret.), who was called into his Reserve Center in

attacks on the World Trade Center’s Twin Towers, the Pentagon, and

Flight 93, which crashed at Shanksville, Pennsylvania. He answered

run the military detention facility at the U.S. Naval Station at Guantanamo

Bay, Cuba. He was called up again just six months after

returning from duty at Gitmo, but this time remained stateside at the

for about a year when he was involuntarily transferred to another

Reserve Army unit that was deploying to Iraq in the fall of 2004.

and served in Baghdad, Abu Ghraib, Camp Bucca, and Ashraf,

He is married and is the father of five children, and lives on

Long Island, New York. He is also the author of “Theodore,” a personal

in the Words of U.S. Troops and Their Families,” where he wrote

about his fear and anxiety over having left his family in 2002, and

especially two-day-old Theodore, and what reaction there was upon

his return. Operation Homecoming was sponsored in part by the

National Endowment for the Arts, and edited by Andrew Carroll, editor

Granger was born in Illinois, raised and schooled in Rubidoux,

California, and attended undergraduate school at the University of

Alabama in Tuscaloosa where he earned a Bachelor of Science degree

in education. He earned a master’s degree in curriculum and teaching

from Teachers College—Columbia University, where he met his wife.

He also attended the State University of New York at Stony Brook,

where he earned professional credits to obtain a New York State

School District Administrators’ license. He is an accomplished coach

and teacher of health and physical education, having taught in Alabama,

California, New York City, and Long Island, before becoming a

director of Health, Physical Education and Athletics. He was most

recently Director of Health, Physical Education and Athletics, and

then District Administrator for Operations for the Comsewogue

school district in Port Jefferson Station, N.Y., and is now a Director of

Health, Physical Education and Athletics, and Director of Facilities

for and east end school district in Long Island.

Granger is the author of many writings and musing as yet unpublished,

but hopefully soon to be shared with a waiting world.