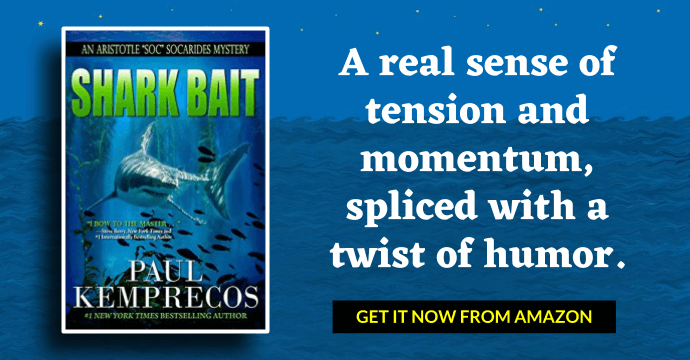 Cape Cod has become the world’s hotspot for the Great White shark. In growing numbers, scores of the fearsome predators patrol local waters to hunt for their favorite prey among the crowded seal colonies. But, unlike JAWS, where a shark terrorized an island community, the beasts that have flocked to the shores of the world-renowned summer resort have been good for business. The spotter planes, shark warning pennants, beach closings, and occasional seal kills have created an air of excitement rather than fear. At least, that is, until Kirk Munson is found dead in Cape Cod Bay, and the suspected killer is a Great White named Emma.

Part-time P.I. Aristotle “Soc” Socarides has been too busy trying to keep his charter fishing business afloat while attempting to avert a family crisis to pay much attention to all the shark fuss. But when he and his faithful old pickup truck become collateral damage in what should have been a routine oyster poaching case, he takes Munson’s place steering a boat for a film crew shooting a movie based on the legend of the reputed witch, Goody Hallett, and the notorious pirate, Sam Bellamy.

As if things aren’t complicated enough, an old flame wants Soc to prove Emma is innocent. And a fading movie star Soc has admired for years requests his help dealing with a gang of murderous thugs acting under the orders of an international war criminal. It doesn’t take long for Soc to find himself swimming in dangerous waters, where he learns the hard way that the most dangerous ‘sharks’ are the two-legged species.
Available on Amazon Barnes & Noble Goodreads


As with his previous stories, Paul has created another fast-paced plot. “Soc” finds himself in trouble with criminals through no fault of his own. After he loses his vehicle and his boat is already down due to engine problems, he answers a call for a boat captain to work on a film set.

What could go wrong driving a boat while a movie is being made? As always, problems seem to escalate when Soc is around. I won’t spoil the story, so no more about what happens. However, I must say, once again Pauls’ larger-than-life characters and riveting plot had me turning the pages far into the night. I look forward to reading Soc’s next adventure.

My fiction-writing career owes it start to the bad navigation of an 18th century pirate. For it was in 1717 that a ship named Whydah went aground off Cape Cod, reportedly carrying a fabulous treasure. Samuel Bellamy, the ship’s captain, was drowned along with most of the crew. In the 1980s, three salvage groups went head-to-head, competing to find the wreck. I was working for a newspaper covering the treasure hunt. The controversy over the salvage got hot at times and I thought there might be a book based on the story. I developed my own detective, an ex-cop, diver, fisherman, and PI named Aristotle “Soc” Socarides. He was more philosophical than hard-boiled. His first appearance was in “Cool Blue Tomb,” which won the Shamus award for Best Paperback novel. After many years in the newspaper business, I turned to writing fiction and churned out five more books in the series. Clive Cussler blurbed: “There can be no better mystery writer in America than Paul Kemprecos.” Several months after the release of “Bluefin Blues,” Clive called and said a spin-off from the Dirk Pitt series was in the works. It would be called the NUMA Files and he wondered if I would be interested in tackling the job. I took on the writing of “Serpent” which brought into being Kurt Austin and the NUMA Special Assignments Team. Austin had some carry-over from Soc, and another team member, Paul Trout, had been born on Cape Cod. The book made The New York Times bestseller list, as did every one of seven NUMA Files that followed, including “Polar Shift,” which bumped “The Da Vinci Code” for first place. After eight NUMA Files I went back to writing solo. I wrote an adventure book entitled, “The Emerald Scepter,” which introduced a new hero, Matinicus “Matt” Hawkins. In 2013, I brought Soc back again in a seventh Socarides book entitled, “Grey Lady.” After that book I wrote a sequel to the first Matt Hawkins book, entitled, “The Minoan Cipher,” which was nominated for a Thriller award in the Best Paperback category for 2017 by the International Thriller Writers. The eighth Soc book, “Shark Bait,” incorporates the aforementioned story of the Whydah, its doomed captain Samuel Bellamy, and his lover, Mary Hallett. My wife Christi and I live on Cape Cod where she works as a financial advisor. We share a circa 1865 farmhouse with two cats. We have three children and seven granddaughters. To learn more about Paul Kemprecos, check out his website at www.paulkemprecos.com.