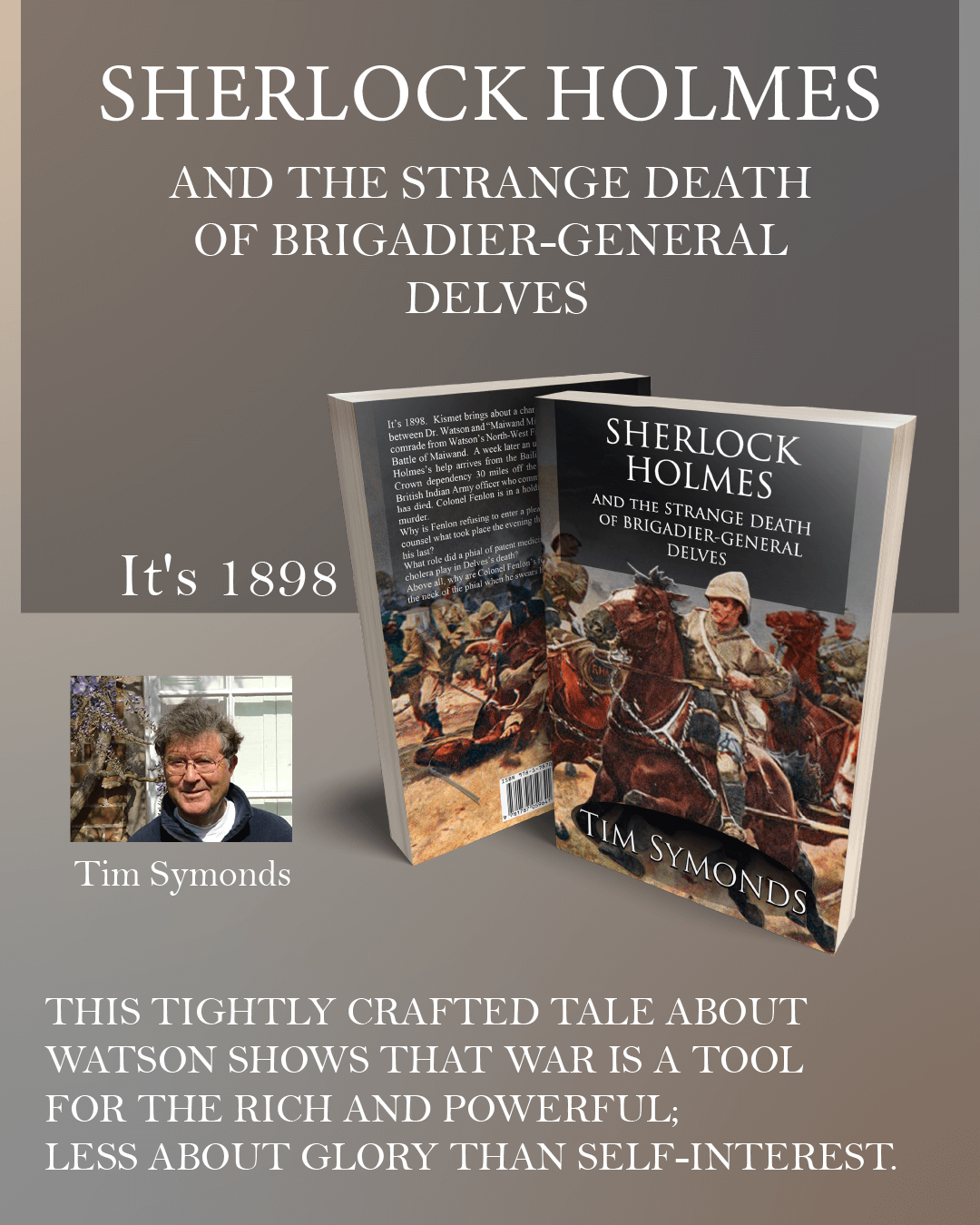 Sherlock Holmes and The Strange Death of Brigadier-General Delves

Why are Colonel Fenlon’s forefinger and thumbprint on the neck of the phial when he swears he has never seen it before?

It’s 1898. Kismet brings about a chance reunion at a London club between Dr. Watson and Colonel “Maiwand Mike” Fenlon, former military comrades from their Northwest Frontier days and the desperate Battle of Maiwand. A week later an urgent cable seeking Sherlock Holmes’s help arrives from the Bailiwick of Guernsey, a British Crown Dependency 30 miles off the coast of Normandy. A retired high-ranking British Indian Army officer who commanded the troops at Maiwand has dropped dead. Colonel Fenlon is in a holding cell awaiting trial for his murder.

What role in the Brigadier-General’s death was played by a phial of patent medicine developed in India to treat cholera? Why are Colonel Fenlon’s forefinger and thumbprint on the neck of the phial when he swears he has never seen it before?

Above all, why is Fenlon refusing to enter a plea or even to tell his Defence counsel what took place the evening the Brigadier-General dropped dead?

About the Author: Tim Symonds

I was born in London and grew up in the rural English counties of Somerset and Dorset, and the British

Crown Dependency of Guernsey. After several years travelling widely, including farming on the slopes of Mt. Kenya and working on the Zambezi River in Central Africa, I emigrated to Canada and the United States. I studied at the Georg-August University (Göttingen) in Germany, and the University of California, Los Angeles, graduating with an honours degree and a Phi Beta Kappa key. I’m a Fellow of the Royal Geographical Society and a Member of the Society of Authors.

Mystery Of Einstein’s Daughter, Sherlock Holmes And The Case of the Bulgarian Codex and my short story compilation titled ‘A Most Diabolical Plot’. Clearly I like sending Holmes and Watson off to foreign parts, the more mysterious the better, as with my fifth novel, ‘Sherlock Holmes And The Nine-Dragon Sigil’. Like my other ‘sherlocks’ it took me a year to write, of which perhaps four months was doing the research. I think now I could lecture at my old university, UCLA, on the final years of the Ch’ing Dynasty and the terrifying but beguiling Empress Dowager Cixi, the like of whom this world may never see again.

In my previous novel (Sherlock Holmes And The Sword of Osman) I spent a lot of time researching the final years of the Ottoman Empire, with Holmes preventing the assassination of the Sultan at the request of England’s famous foreign secretary Sir Edward Grey. In ‘the Nine-Dragon Sigil’ Sir Edward again asks Holmes to take on an assignment, this time in the fabled Forbidden City in the far-away ‘Middle Kingdom’. Holmes and Watson take up the mission with their customary confidence – until they find they are no longer in the familiar landscapes of Edwardian England. Instead, they tumble into the Alice In Wonderland world of The Forbidden City. China at the end of the Ch’ing, as the 20th Century commenced, was a wonderland still hardly known to the outside world, and I found it enthralling to write about.

My latest ‘sherlock’ is titled ‘Sherlock Holmes And The Strange Death of Brigadier-General Delves’. For the first time in my novels I have set it around a murder trial, and decided to have the trial held in the tiny island of Guernsey where I was largely brought up.

My publisher MX Publishing is about to bring out my next book of short stories. We haven’t yet decided which of the six stories to use as the overall title of the book but it may well be ‘The Torso At Highgate Cemetery’. For anyone who hasn’t visited that famous cemetery in North London (where Karl Marx is buried) I recommend you spend an hour or two there. The extraordinary cemetery could make every one of you decide to take up your quill and start writing Sherlock Holmes stories.