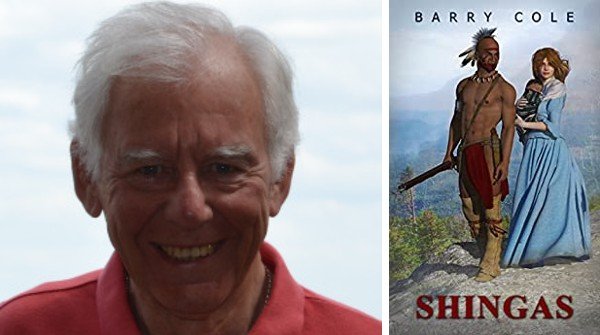 Horrified by this violation, when she is given the opportunity to escape she seizes her chance and together with the young French girl she makes her bid for freedom.

After six years of bloody conflict, the war between France and England was over and Canada had a new ruler, King George the third. But for Shingas the fight against the English was not finished and after witnessing the brutal murder of his warriors by a company of redcoats at Fort Detroit, his desire for revenge burned like a fire in his heart.

Meanwhile, two hundred miles to the east on an isolated farmstead, Esther an indentured servant, wooed by the prospect of being released from the shackles of servitude, agrees to marry the farmer’s eldest son, a simpleton, in exchange for her freedom.

Unwittingly fate was to bring them together and on the day of her wedding, Esther is abducted by the savage war chief and taken as a captive back to his village. Befriended by an old squaw and a young French girl, a captive like herself, Esther accepts her plight and is quickly assimilated into her new life. All this changes when, seeing her bathing, Shingas forces himself on her. Horrified by this violation, when she is given the opportunity to escape, she seizes her chance, and together with the young French girl, she makes her bid for freedom.

But her hopes are quickly dashed when pursued by Shingas, she is captured and brought back to the village. Nine months later she gives birth to his child. With discontent growing among the tribes as the English settlements encroach ever deeper into their lands, Shingas leads an attack against an English fort, and after killing all inside he burns it to the ground.

Roused into action and determined to subdue this uprising and to punish those responsible, the English send an army under the command of Colonel Bouquet against them. And so deep in the wilderness at a place called Bushy Run, redskins and redcoats are joined in battle and in the space of a single day the fate of a nation is decided and so too is the fate of Esther and her child.

About the Author: Barry Cole

Barry Cole was born in Yorkshire and after leaving the army he began contributing stories and articles to the monthly magazines of two Native American charities. With a love of film, he then studied for two years at the London Screenwriters Workshop. His first book, The Time Bandit was published in 2016, followed by a historical novel Shingas a few months later. His third book The Conquistadors Horse was published in 2018 and has been optioned as a short film by Looking Window Pictures. His latest book The Letter, which was inspired by the Battle of Stalingrad has now been published by Michael Terence Publishing and is available on Amazon. After living on a narrowboat for several years he has now returned to his roots in North Yorkshire.