Skills of the Warramunga by Greg Kater 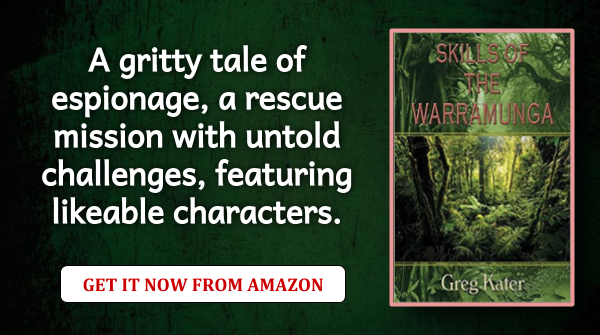 Early in 1946, former army officer, Jamie Munro, and his half-Aboriginal friend and colleague, Jack ‘Jacko’ O’Brien, who head the Commonwealth Investigation Service in Darwin, are called on to assist in the rescue of Colonel John Cook, a senior operative of MI6, who has been kidnapped by bandits and taken into the jungles of Malaya.

Jamie and Jacko had worked in intelligence operations with Colonel Cook during the desert campaign in North Africa in the Second World War, as the Afrika Corps threatened Egypt.

With Jacko’s half-sister, Sarah, a full-blood Aborigine from Tennant Creek, they arrive in Kuala Lumpur to find that they not only have to contend with the impenetrable jungle of the Malay peninsula, but also with a murderous and subversive organisation of Fascist criminals whose aim is to disrupt the creation of the Malayan Union by the British Military Authority, set to take place on 1st of April 1946, foment an uprising and take over control of the country.

All the inherent bushcraft skills of the Warramunga are needed to rescue Colonel Cook as well as prevent catastrophic mayhem on the Malayan peninsula.

This is the third book in the Warramunga trilogy.


Jamie, Jacko, and Jacko’s sister Sarah are called on to use their military and tracking skills to rescue their old boss Johnny Cook from kidnappers who have him hidden in the jungle of Malaya. This is 1946, after WWII, and Malaya is set to undergo a change of government, but several factions have other ideas – they want control themselves.

This novel is full of suspenseful action set in vividly described scenes like the jungle, limestone caves, a tea plantation, and the harbor. The characters are portrayed well for the most part. I don’t like the way Sarah acts at times, giggling like a little child. She’s young but not that young.

It’s fiction interwoven with real historical events and it’s excellent! I had some trouble with all the acronyms and, since the author is British and I’m not, I didn’t always understand the “officialese”. The action was intense at times, the stakes were high, and the outcome mattered. Political intrigue, danger, history, suspense, and a little bit of romance. This author did a great job!

Greg Kater is an Australian-based author. He lives in Sanctuary Cove, Gold Coast, Queensland and has recently retired from a 55-year international career in the resources industry. The Warramunga’s War is his first work of fiction. He has since written and published two more books, The Warramunga’s Aftermath of War and Skills of the Warramunga, altogether comprising a trilogy.
The principal fictional characters interact with actual historical figures and events which have been rigorously researched. The subject of each novel is partly inspired by the experiences of the author’s father during the war in the Middle East, and partly by his own experiences in South East Asia and in northern Australia where he worked extensively throughout the Northern Territory and the Kimberley. The principal themes are adventure, friendship, mystery, criminal investigation, romance and skill.