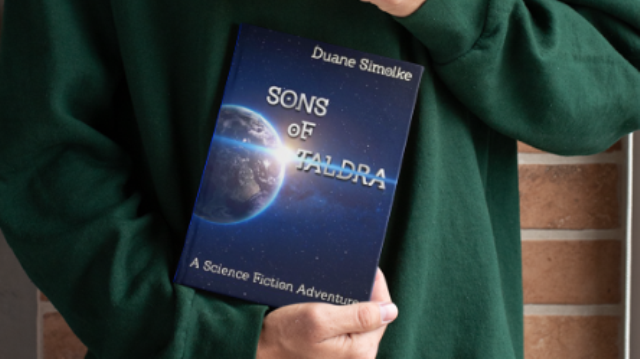 In an alternate reality, the human home world of Valchondria comes together under a constitution based on the Iroquois Federation. Centuries later, the brilliant scientist Taldra becomes Valchondria’s Leader.

Now Taldra and her twin gay sons must form new alliances as humanity faces a race of alien shapeshifters intent on using people as a food source. One of Taldra’s rivals might pose an even greater threat.

“The most intriguing aspect of the story is controlled by emotion as relatable characters grow and brave it all together, selflessly helping each other.” -Enas Reviews

Texas author/poet Duane Simolke earned his three advanced English degrees from Belmont University in Nashville, Hardin-Simmons University in Abilene, and Texas Tech University in Lubbock, TX. He has published seven books in varying genres and has had articles/poems published in nightFire, Mesquite, Caprock Sun, Midwest Poetry Review, International Journal on World Peace, among others. His awards include Winner, Allbooks Reviewers Choice Award and four StoneWall Society Pride in the Arts Awards. Duane’s ability to capture the mind and permanently etch the brain with his characters and ability to find the humanity in his works is stunning. With SONS OF TALDRA Duane leads us into a fantasy, a science fiction story that he places in an alternate reality which he describes as he opens his story: ‘In another dimension, Valchondria (Earth) developed a one-world government, consisting of Leader, the Maintainers, and the Supreme Science Council. A millennium ago, the Valchondrians sent two ships of colonists into deep space, with the idea that humanity would one day outgrow the home world. The first ship became radicalized by a violent religious cult that founded the planet Degranon. The second ship was attacked by alien creatures. Valchondria banned contact outside its atmosphere and shut down the space program. Over the centuries, freedom and progress decayed. A year ago, a new Leader and her twin sons helped stop an invasion. Degran spies had implemented a long-term plan that involved drug addiction and a deadly virus.’ From this cinematic description Duane takes us into not only a very fine story but also introduces gender issues (the sons of Taldra are gay), shape shifting, the concept of alien creatures, and binds these concepts into a novel that is not only involving and immersing, but important in its relationship to our current reality. The synopsis Duane provides delineates the plot well: ‘In an alternate reality, an Iroquois scientist and her twin gay sons battle shapeshifting aliens. Telius wants to marry the man he loves. Argen struggles with the residual effects of a deadly drug addiction. Both twins help their mother face Valchondria’s greatest threats. Taldra accepted the title of Leader for Valchondria’s one-world government. Maintainer Admiral Nil blames her for a series of tragedies and might be as dangerous as the changelings that want to feed on humanity.’ This is a superb novel, a book as fine as the other works Duane has published – and may just be his finest. He is a major voice not only in American literature but also in the LGBTQ genre. Highly recommended. Grady Harp, March 18

One of Taldra’s rivals might pose an even greater threat.

Dear Reader, author’s recently published book “Sons of Taldra: A Science Fiction Adventure: Gay SciFi” is now available on leading bookstores, get your copy now and help the author by writing a review of the book.
Available on Amazon