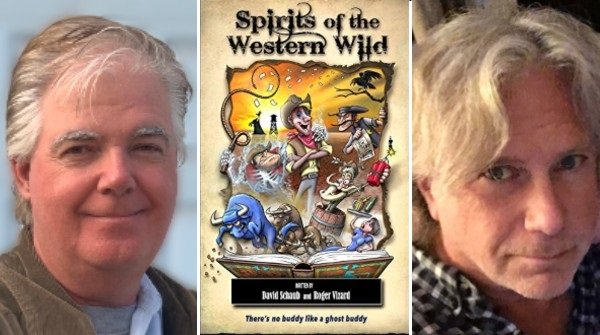 This paranormal adventure follows a young adventure-seeker and a curmudgeonly ghost bound together in a combative partnership that escalates to the comedic breaking point. Only by reconciling their differences are they able to defeat destructive forces working against them, and uncover the profound connections that weave their fates together.

Synopsis (extended):
This mystical adventure follows a young adventure-seeker named Luther McCleron on a westward journey to learn more about his Grandfather. A series of fateful missteps take Luther far from his destination to a disheveled little town under the tyranny of a crooked sheriff named Big Willie. It’s here that Luther comes face-to-face with the legendary ghost of Monty: a curmudgeonly ghost who refuses to believe he’s dead. Luther just wants to get back to his quest, but Monty thwarts his plans by using Luther to take out his vengeance on Big Willie.

Through a catastrophic string of events, Luther and Monty find themselves hopelessly entangled in a combative partnership that escalates to the breaking point. Only by reconciling their differences are they able to uncover the profound connections that weave their fates together.

A mysterious book of premonitions, an ominous crow, and ancient Indian drive the mystical tone of this world; conjuring spiritual forces to help steer Luther on his journey through this western “twilight zone.”

All the loose ends resolve in a satisfying story of redemption, loyalty and ascension while exploring the mysterious nature of fate and destiny. Was all of this a coincidence? Or are we guided by ancient “spirits on the wind” that nudge and steer us along our path to assure that we arrive safely at our intended destination in the end?

Adapted from screenplay for animated feature.
This ILLUSTRATED Kindle edition is a supplement to the audio drama released on Audible.