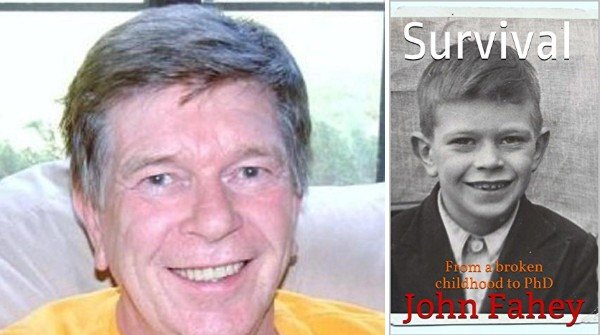 Born illegitimate in north east England in 1944, John Fahey was sent to his father’s parents in western Ireland. John’s parents later married and brought back to England when he was nine, he was continually beaten and battered by his father, who called him a bastard, throughout his teenage years. Surviving on his memories of Ireland, his trust in his Catholic faith, the help of kind people and relatives, and his love of chemistry, John went through major crises, feeling lost and alone in 1960s England and Scotland, he took on challenges, fought back against despair, and struggled with his sexual identity under legal intolerance. But determined to find a better life he went to university and finally to America.
This is a story of surviving against the odds.

A very intriguing story of triumph against the odds. He has such clear memories of Ireland where he enjoyed a 4 year respite from his abusive father, regular meals, and historical stories told by his grandfather. He is taken back to his family in England, back to his old school which still stands next to bombed houses. John's hope of returning to Ireland keeps him going, as well as his hope of finding a means of escape through his reading and studies, history the only subject that eluded him as it did not agree with what he had learned from his grandfather. John works hard in school, taking care to hide his success from his spiteful father, and takes odd jobs to buy needed items and treats, for both himself and his siblings, before his father can take all his money to buy beers at the pub. I cheered when his Aunt Josie clobbered his dad with a frying pan. John thankfully remembers all those that did help him along the way, as he escapes to work in a chemical plant that pays for night classes, only returning to his home, or an aunts home, late at night. He gives up part of his money to the landlord to insure that the rent on the family home is paid on time. His account of a hiking excursion with co-workers made me imagine that I was walking through heather and sedge and around bogs. Then a biking accident gives him some time off and a much needed trip back to Ireland, and a bike trip to a holy place where he is relieved of his worry over the scars incurred from his accident. When he is accepted into a prestigious college in Scotland, he finally learns to relax and enjoy life on a daily basis, and during vacation travels through Europe, hitch hiking on the autobhan. I wished I was there when he took a train and inadvertently helped two women smuggle washing machine parts to Ljubljana. Eventually he makes it to America, and I could imagine just how exciting that must have been, and how tasty that first pizza was. I was hooked from beginning to end.

I’m a scientist retired from a career in biomedical research. I’ve begun to write memoirs of my life. The first one covers my life up to age 23. The title is Survival, subtitle From a broken childhood to a PhD. The second one, Arrival: An Immigrant Story, continues from the first, up to 1987, as I am about to become Director of Research at the Community Research Initiative in Manhattan. I have a web domain in which I write about topics aiming at a healthy longevity. That domain is www.erinpharm.org. You can see an account of my life and career on the about_me page at that domain. It is entirely informational. I do not sell anything nor do I have any affiliation to pharmaceutical companies or medical groups. I look forward to the future with a sense of awe and wonder.

This is a story of surviving against the odds.

Dear Reader, author’s recently published book “Survival” is now available on leading bookstores, get your copy now and help the author by writing a review of the book.
Available on Amazon