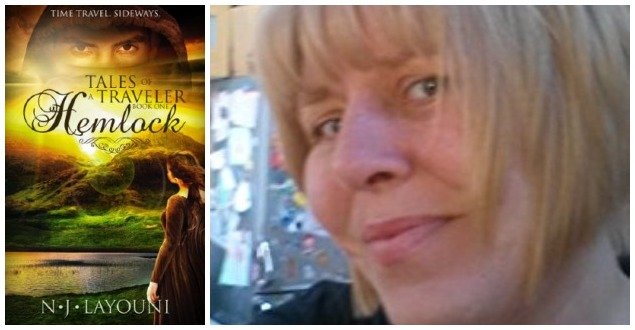 Desperate to forget her worthless ex-boyfriend and the humiliating way in which they parted, Martha Bigalow goes on a long hike in the rain, hoping the dramatic scenery of the English Lake District will ease her unhappy heart. But as she crosses an ancient set of stepping stones, she tumbles into an angry river.

She wakes up in a cave, wearing nothing but her dodgy, mismatched underwear, and her only company is the strange man who saved her life. Tall, dark, and extremely handsome, Vadim definitely has the potential to help Martha forget. But this isn’t the twenty-first century, and medieval Erde is nothing like home!

If Martha wants to fit in here, she’ll need a lot of help, but Vadim’s protection comes at a price. In order to secure his aid, she must assume the role of his “wife.”

Vadim is a wanted man. An outlaw.

The last thing his life needs are complications of the female kind. But when he happens upon the strangely attired woman lying beside the river, he cannot abandon her. And so, despite all the risks, and against his better judgment, Vadim offers to help Martha find her way home.

But until then, Martha must adapt to medieval society, to avoid the Evil Earl and his minions, and maybe–just maybe–learn how to trust her heart again.

(Polite warning! This book is NOT a standalone. Please steer clear if cliffy endings aren’t your thing!)

“Tales of a Time Traveler: Book One”

The idea of time travel is fascinating and I always wonder how anyone would cope if they suddenly found themselves in a totally different time than the one they had always known. This story is a good example of the type of problems likely encountered. Not having financial resources or anyone who believed you or was willing to offer you any assistance would be a major problem. Once you found some way to exist you would begin to interact with others and relationships would develop. How much could you trust others or should you trust no one. Then, what would you do if the possibility of returning to your time and your previous life ever happened ? Many of those issues are addressed in book one but not all of them and as history begins to become reality for our time traveler the book gets much harder to put down and get on with our own life. Good writing. Anxious to see book two.

N.J. Layouni has been weaving stories all of her life–even before she could actually write. For many years, she was a dedicated ‘closet writer’, and as a result, the attic space of her home is stuffed to the rafters with piles of ageing manuscripts depicting fantastical romantic adventures, tales of daring sword-wielding heroes, and of strong, feisty damsels who aren’t too tough to accept a helping hand sometimes.

As well as being a mouthpiece for the various characters living inside her head, N.J. is a wife, and mother of two children. She lives in Lancashire, UK. When she’s not writing, she can usually be found on one of her regular online hangouts: