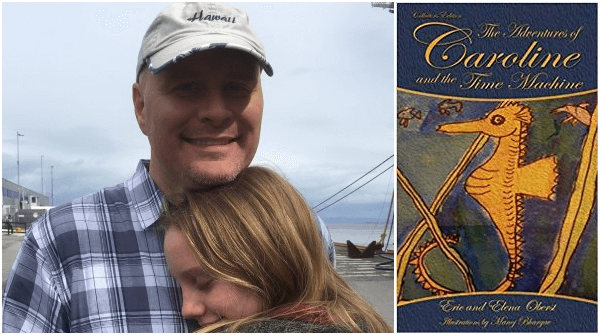 The Adventures of Caroline Series

Follow Caroline as she travels through time on wild and fantastic journeys in search of her long lost parents. Join her as she encounters a Woolly Mammoth, comes face to face with T-Rex, and rides a giant sea horse! Will she find her parents? Come join the adventure and find out!

Charming chapter book targeted for readers in the six to twelve age range. This book stretches more than one hundred pages, and is best suited for readers in the eight to twelve age bracket. Color illustrations at the beginning of each chapter are well done; they capture the dreamy quality of the fantasy tale. Caroline is an inquisitive and imaginative eight year old who lives with her Auntie Ann since her parents mysteriously disappeared when she was four years old. On a cold morning in January, Caroline is bored and decides to go up to the attic, which is one of her favorite places to explore She rummages through one of the trunks and finds something new at the bottom of one of them. It is a box with dials, buttons and antennas that looks like an old radio. She experiments with the dials and sets it to June 15, 2015. When she goes downstairs for a snack, she finds the weather outside is warm and the birds are singing. Caroline has stepped six months into the future. Discovering that the device seems to work, Caroline sets it back to the time of the dinosaurs. She gets more than she bargained for when she encounters T Rex. By quickly turning the dial, Caroline escapes but finds herself in the Pleistocene Age with Woolly Mammoths and Saber Tooth Tigers. Again she hurriedly sets her dial. This time she is about one hundred years in the past near her house where she meets a little boy named Tommy who wants to befriend her. Caroline sets the dial once more and arrives back at Auntie Ann's house. After doing some more research, Caroline tracks down her parents' whereabouts on the day they disappeared. She is determined to go back to the past and find out what happened to them. But will she get more than she bargained for? Will Caroline be able to bring her parents back to her time or will she step into theirs? This book is a delightful science fiction/fantasy time travel tale that has a broad appeal. Caroline is a strong, determined female role model who knows what she wants and goes after it. The short chapters with appealing illustrations make it a good choice for a class read aloud and discussion. Look forward to the next book in the series. Warning! The end of book one is a cliffhanger.

Eric Oberst lives in South Florida with his wife and two children. The series The Adventures of Caroline began with The Time Machine, a short story that introduced Caroline, the characters, and the storyline. Now, with the second in the series, we are official! The Adventures of Caroline and the Emerald Dragon dives much deeper into Caroline’s adventures, and really gets the series off the ground. We have begun the third volume – The Quest for the Emerald Whistle– in earnest and can’t wait to finish it! I always like to say that writing is seldom anyone’s primary profession unless it can support itself. However, it is so much more rewarding to have the time to work on these stories with my children. I enjoy experiencing their excitement as the project develops into actual words and illustrations on real pages they can hold in their hands, especially now that two volumes are in print and a third is on the way. I also believe that the release of a Spanish translation has broadened my children’s horizons, further enticing them to learn the language. I hope it helps spread the story and inspires young kids everywhere. The catalyst for a healthy imagination must start somewhere; my hope is that they will get much more out of this project than I put into it.

Will she find her parents? Come join the adventure and find out!

Dear Reader, author’s recently published book “The Adventures of Caroline Series” is now available on leading bookstores, get your copy now and help the author by writing a review of the book.
Available on Amazon