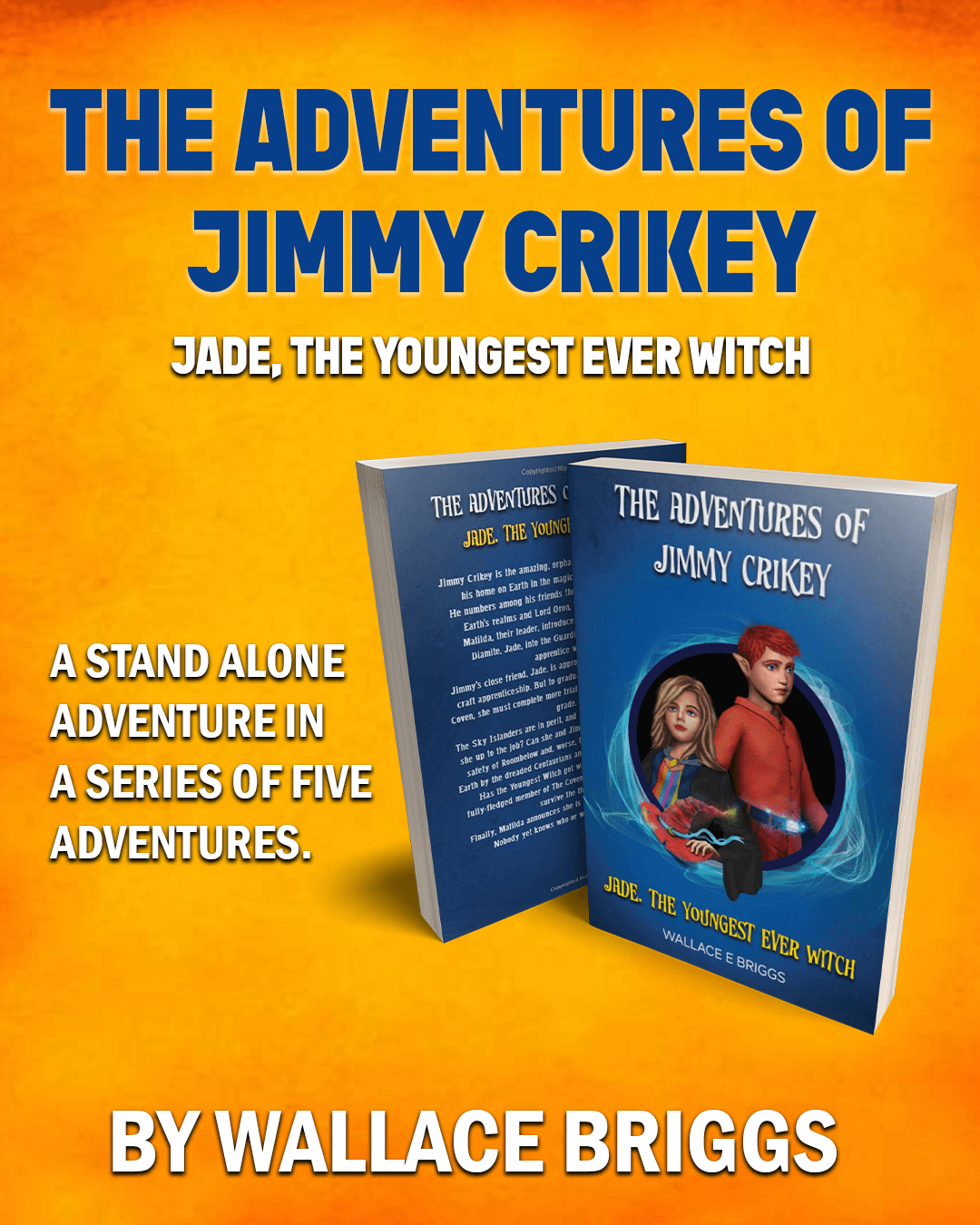 The Adventures of Jimmy Crikey

Jimmy Crikey is the alien orphan who, despite the bullies, chose to make his home on Earth in the magical lands of Roombelow. He numbers the Four Guardian Witches of Earth’s realms among his friends, which includes Lord Oron, and The Weatherman.
The leader of the Guardians, Witch Matilda, has chosen the remarkably young Diamite, Jade, to become her apprentice. Jade is approaching the end of her apprenticeship with Matilda. But there are several challenges to complete before she becomes a fully qualified member of the sister’s Coven. Jimmy is told she is asked not to help Jade directly. She must succeed in the trials using only her skills.
When collapsing roofs threaten the cave world of Lithnia, both Jimmy and Jade’s skills are needed to save Lithnia from the giant, rock-chewing beatles who originated in Egypt as scarabs.
Then the Sky Islands are caught in tornado winds and a whirlwind. The Islands are about to be torn apart, and Matilda instructs Jade to go to their aid. Jimmy is forbidden to interfere but he does help Jade to carry out her plan to save the Islanders. Can the youngest witch overcome the danger?
Madam Cleoptra, the ruler of the Sky Islands, has given birth to Lord Oron’s son, Uran, and he must be introduced to the Coven of sister witches.
The dreaded Giant Scarabs return to their destructive chewing of rocks, threatening Roombelow, far away from Lithnia. Jimmy and Jade trace the beatles resting place to a floating island in the Arctic seas, where the Centaurians, a race from planet Xe in the Alpha Centauri system, are collecting diamonites from Lithnia to protect their planet from the gamma rays emitted by one of their suns. To save their world, they would risk destroying Earth. Jimmy employs XRU, his talkative starship’s navigator, to help the aliens to resolve their plight without bloodshed.
Then Matilda launches a bombshell: she has been called to move to a higher realm. Who will be appointed as her successor?

About the Author: Wallace E Briggs

Wallace Briggs (1943 – present). My formative years were experienced in and around Durham City. Married in 1964, to my childhood sweetheart, Pat and I spent 40 happy years in the North East before employment almost took us off to emigrate to South Africa. But plans were changed in the final weeks, and instead the company moved us to East Sussex.

After over twenty years in Sussex, then Hampshire, employment was again responsible for the move to a beautiful rural Lancashire.

Jimmy Crikey was born one rainy day, many years ago, during a family holiday in Great Yarmouth, to entertain my son and his newfound friends for about an hour. The story expanded over the following rainy afternoons in the cramped confines of a beach tent, and more and more adventures were required to keep the children entertained.

My latest story is a children’s fantasy fiction based on this central character of somewhat (very) unusual appearance and relate the adventures that befall Jimmy Crikey when he runs away to escape incessant bullying. Jimmy’s search for a better life leads to several adventures in a subterranean world of magic and mayhem and monsters.

“The Amazing Adventures of Jimmy Crikey” is aimed at a young audience and was written in 20 minute bedtime-reading-slots. It was recently read, cover to cover, in one day by an eleven-year-old who thoroughly enjoyed the escapism. I intended it to be an easily understood, adventurous romp in fantasy land, demonstrating that even the underdog can achieve greatness.

Another story in the fantasy genre, “Romney Hole”, was written for early to mid-teens readers, and revolves around the holiday exploits of two teenage, Yorkshire Dale youngsters, brother, Zach, and tomboy sister, Rachel. Their leisure activity of potholing on the moorlands, above their farm, leads to the discovery of an alien energy life form. Taras transfers his powers to the two young people and in so doing gives up his existence.

I published a third Jimmy Crikey adventure Sept 21. The fourth was published in April 2022 and the fifth in December ’22.