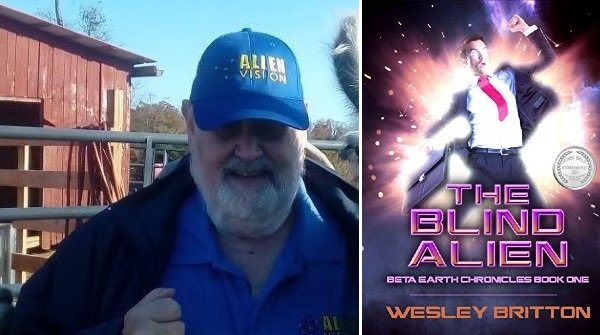 “The Blind Alien is a story with a highly original concept, fascinating
characters, and not-too-subtle but truthful allegories. Don’t let the
sci-fi label or alternate Earth setting fool you–this is a compelling and
contemporarily relevant story about race, sex, and social classes.”–Raymond
Benson, Former James Bond novelist and author of the Black Stiletto books

Told with one of the most original styles you’ll ever experience, The Blind
Alien begins when Dr. Malcolm Renbourn, a young history teacher, walks into
an ordinary bank on an ordinary day. Suddenly, he feels excruciating pain.
Unexpectedly, he loses his sight and discovers he has been drawn against his
will across the multi-verse to a slave-holding country on a parallel earth.
He doesn’t understand a single word he hears, but he soon learns Betan
scientists hope his body carries the cure to an ancient plague that kills 3
out of 4 male babies their first year.

Branded state property, he must escape, but where can a blind man in a
strange world dominated by desperate scientists run? And on a world where
polygamy is the norm, how can a fugitive alien adapt into becoming the
husband of five independent wives who never expected to be the mothers of a
generation a planet hopes carry the genes that will change everything? How
can Tribe Renbourn survive the aftermath of a catastrophic explosion that
kills thousands?

And that’s just part of the story.

“A most commendable and unique novel. I can honestly say I have not come
across anything quite like it. The Blind Alien follows the life of an
unremarkable man who by some twist of fate is pulled from his world, into
that of one parallel . . . What follows is a story of rebellion, politics,
love, science, and religion . . . without a doubt, this is an admirably well
crafted piece of work, that was both entertaining and very thought
provoking.”–Tosin Coker, author of The Chronicles of Zauba’ah

What a fun read! A man is swept out of his world into a new world - a sort of "parallel universe" idea. That is the only part of this book that reminds me of any other book in the Sci-fi / Fantasy genres. Do not let the confusion of new language, and different names for our world items and titles, keep you from digging right into this book. Eventually you will figure out the items and titles. And, if you are like me, you will really come to enjoy the writing style! This is a book that will grow on you, and keep growing on you. The characters become real, the plot expands, and the book just gets better and better! There was a lot of thought and attention to detail in this. I love the telling from the various points of view. Great book, and I am looking forward to the rest of the story in the next of the series.

Dr. Wesley Britton is the author of four non-fiction books, Spy Television (2003), Beyond Bond: Spies in Fiction and Film (2005), Onscreen and Undercover: The Ultimate Book of Movie Espionage (2006), and The Encyclopedia of TV Spies (2009). Starting in fall 2015, his science fiction/ mystery/ espionage series, The Beta-Earth Chronicles debuted with the ground-breaking The Blind Alien. Throughout 2016 to 2019, six sequels followed including The Blood of Balnakin, When War Returns, A Throne for an Alien, The Third Earth, Return to Alpha, and Alpha Tales 2044. Alpha Tales was his first collection of Beta-Earth short stories. Two more volumes are in the works as new stories are coming out regularly. Many are currently only available to newsletter subscribers and others are available on Kindle Unlimited and at discount prices. Britton earned his doctorate in American Literature at the University of North Texas in 1990. From 2007 to 2015, he was co-host of online radio’s “Dave White Presents” broadcast over KSAV.org. For DWP, Wesley contributed interviews with authors, musicians, actors, and many entertainment insiders. Wesley taught English at Harrisburg Area Community College until his retirement in 2016. Blind due to the progressive genetic disease retiniteous pigmentosa. Wesley served on the Board of Directors for Vision Resources of Central Pennsylvania for 14 years. He has been writing book reviews for sites like BlogCritics.org and BookPleasures.com for many years. The Blind Alien won the 2020 Recommended Read award from Author Shout. Find out more about the Beta-Earth Chronicles at: htpp://www.drwesleybritton.com Sign up for our monthly Beta-Earth newsletter to get all the news of the multi-verse, get some seriously cool freebies, and stay in contact with Wesley. http://eepurl.com/dwvfQr Follow Wesley Britton’s Beta Earth Chronicles Facebook page: https://www.facebook.com/BetaEarthChronicles/?ref=edit_photo View the snazzy Beta Earth Chronicles videos at: Note to reviewers and bloggers: if you would like to talk with Wesley about reviews, cross-promos and interviews you can email him at spywise@verizon.net.

The Blind Alien is a story with a highly original concept, fascinating characters, and not-too-subtle but truthful allegories.

Dear Reader, author’s recently published book “The Blind Alien” is now available on leading bookstores, get your copy now and help the author by writing a review of the book.
Available on Amazon