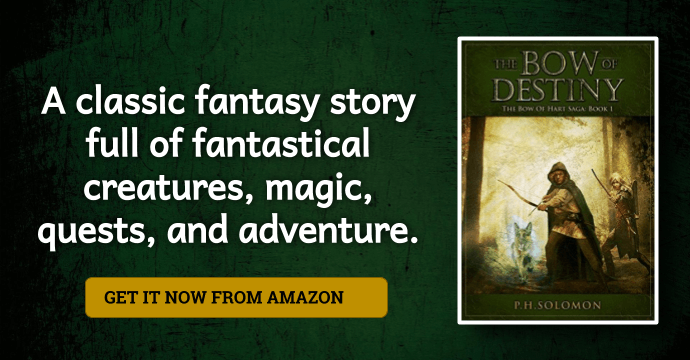 Haunted by his past. Hunted in the present. Uncertain what is real.

This unique epic fantasy will keep you turning pages as Athson discovers his destiny is both inconvenient and unavoidable.

Athson has seen things that aren’t there and suffered fits since being tragically orphaned as a child at the hands of trolls and Corgren the mage who serves Magdronu the dragon.

When a strange will mentioning a mysterious bow comes into his possession, Athson’s not sure it’s real.

But the trolls that soon pursue him are all too real and dangerous. And they serve Corgren and his master, the hidden dragon, Magdronu.

Athson is drawn into a quest for the concealed Bow of Hart by the mystic Withling, Hastra.

But Athson isn’t always sure what’s real and who his enemies are.

With Corgren and Magdronu involved, Athson faces frequent danger, his grasp on reality, and the reasons behind his tragic past.

Pick up the first book of The Bow of Hart Saga because it’s “quietly addictive.”

Coming to Audible 9/25/2018!
This is BOOK ONE of The Bow of Hart Saga. The other two books have been released:
BOOK TWO: An Arrow Against the Wind
BOOK THREE: The White Arrow

Reactions to The Bow of Destiny:
Awards: Fantasia Reviews 2016 Book of the Year
“Solomon has his own signature touch that gives us not only something original and unique but will leave many fantasy readers waiting for more.” – ★★★★★ Fantasia Reviews, 2016 Book of the Year
“…one can almost see the trail, and fear the trolls.” – ★★★★★ Amazon Review
” the characters are still dancing around in my head, the sign of a fantastic journey.” – ★★★★★ Amazon Review

Scroll up and download the book today and discover what thousands of other readers have enjoyed.
Available on Amazon Goodreads


It’s been a while since I’ve read a fantasy novel and this book reminded me of everything I’ve been missing. A great plot, strong characters, cryptid visions, a quest, adventure, and magic. The writing is polished, the scenes vivid and the pacing perfect for keeping the reader flipping pages. Truly, an epic fantasy novel with twists and turns aplenty.

The author’s world is populated by humans, elves, dwarves, giants and trolls (among others), and he does a great job of giving each race its own history and distinctive traits, effortlessly transporting the reader to a mesmerizing realm.

What really engages me in a novel, however, is my attachment to the characters. From hero, Athson to the band of adventurers that gathers around him, I was not disappointed. I especially like the handling of Athson’s growing relationship with Limbreth and also the way he interacted with the withling, Hastra. Even after finishing this book, the characters are still dancing around in my head, the sign of a fantastic journey.

One of the best books I’ve read this year, I highly recommend The Bow of Destiny, and eagerly look forward to the next in the series. Let the adventure continue!

P. H. Solomon loves reading and writing fantasy of all kinds, especially epic fantasy. If a book has dragons, elves, dwarves, wizards, magic or mythical creatures, it’s in his reading zone. He lives in the greater Birmingham, AL area where he strongly dislikes yard work and sanding the deck rail. However, he performs these duties to maintain a nice home for his loved ones as well as the family’s German Shepherds. In his spare time, P. H. rides herd as a Computer Whisperer on large computers called servers (harmonica not required). Additionally, he enjoys reading, running, most sports and fantasy football. Having a degree in Anthropology, he also has a wide array of more “serious” interests in addition to working regularly to hone his writing. His first novel, The Bow of Destiny was named 2016 Book of the Year by Fantasia Reviews and is the first book of The Bow of Hart Saga. The sequel novel, An Arrow Against the Wind, was released in April of 2017. The third book of the series, The White Arrow, was released during October of 2017. P. H. Solomon also authored the award winning short story, The Black Bag, which won best published short story at SCWC 2012. P. H. is also a member of Science Fiction and Fantasy Writers of America (SFWA).