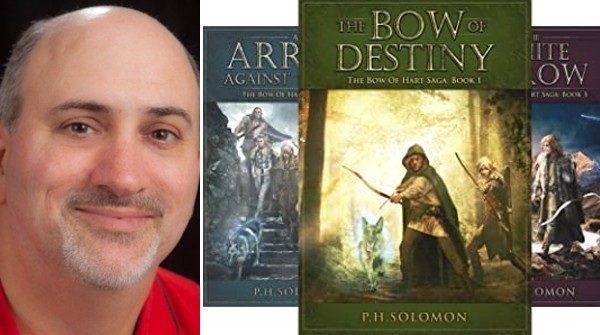 This is an epic fantasy featuring a dragon, magic, mystical characters, wizards and other fantasy denizens.

Award-Winning Fantasia Reviews Book of the Year
A fresh new epic fantasy approach pitting a shapeshifting dragon against a prophesied reluctant hero. “The characters climb off the pages.”

Haunted by his past. Hunted in the present. Uncertain what is real.

Athson has suffered hallucinations ever since he was orphaned, including a dog no one else sees. The will in his possession, bestowed in a dream, can’t be real. But the trolls now hunting him are. A destiny, both inconvenient and unavoidable, drags Athson into an unwanted quest that challenges all his assumptions.

Can he trust anyone?

Sworn to secrecy by his dead father about the bow, Athson wants nothing to do with it. A dragon and a wizard want the bow – and Athson dead. Running from the quest and his destiny are tempting options.

Then he finds something unexpected. Will his discovery destroy him before he recovers the bow?

If you love classic fantasy with new ideas, read The Bow of Destiny because it’s quietly addictive. Get it now.

This is BOOK ONE of The Bow of Hart Saga. The other two books have been released: BOOK TWO: An Arrow Against the Wind and BOOK THREE: The White Arrow The entire series is now available on Audible.

P. H. Solomon is a computer geek and sports fanatic, as well as a dad who is thankful everyday for his supportive family. As an award-winning and bestselling author, he loves twisting reality, and using his anthropology degree to add a new dimension to his stories. Come join him on his fantastical journey into the wilds of the Bow and Hart Saga series.