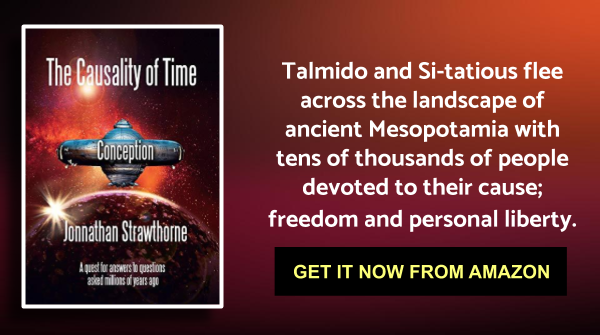 Talmido and Si-tatious flee across the landscape of ancient Mesopotamia with tens of thousandsof people devoted to their cause; freedom and personal liberty. The settle at the headwaters of the Tigris River and the Sea above Akkad to build a city to rival Ninevah and Babylon.Ki-zith-rist, the first to emerge of this race, is running out of time. A traitor is in the midst and he must be found before the Empire destroys the fleeing rebels. He is commissioned, by the Annunaki, to send out millions of autonomous robots to search for habitable worlds and to setup teleportation star gates.Mardupoe, one of the Annunaki, embarks on a campaign to subvert the Primus’ and Authorial’sstated missions. His cohorts devise a plan to confuse any attempt by the 14th dimension to destroy the prime directives of the Trilateral Perigee.The Primus, entrusted with maintaining order in the 14th dimension as the Originator is away onbusiness in the 33rd dimension, is faced with open rebellion and has to come up with a plan ofaction to deal with the rebels.The Authorial becomes increasingly worried at the decisions being contemplated by the Primusand decides to take matters into his own hand.
Available on Amazon Kobo