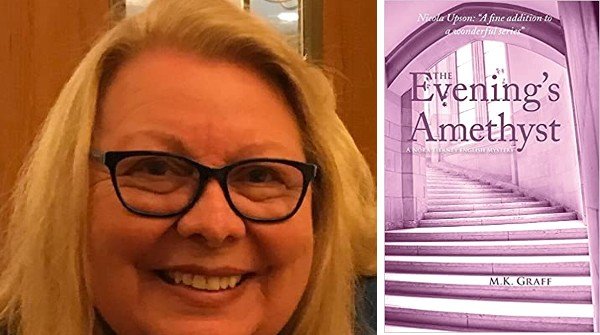 Who is Verity? That becomes a central question for American Nora Tierney, who has moved to her new Oxford home with her fiancé, DI Declan Barnes, and her young son. Declan’s new case at Exeter College coincides with a frantic call from Nora’s stepsister, Claire Scott: a fellow graduate student has died in a fall, and Claire begs Nora to help her prove her friend didn’t commit suicide. The sisters conduct their own snooping, while Declan and his team juggle this death with a cold case that proves to be more surprising than Declan could ever imagine.

About the Author: M K Graff

Marni Graff is the author of The Nora Tierney English Mysteries, and The Trudy Genova Manhattan Mysteries. Graff is also managing editor of Bridle Path Press, an indie curated press out of Baltimore, MD. She has taught creative writing in Belhaven, NC, and is a member of the NC Writers Network, The International Association of Crime Writers, Sisters in Crime, and two local SinC chapters, Maven of Mayhem (NY) and Triangle SinC (NC).

Graff’s mentor and friend, PD James, convinced her to add the Trudy Genova series after she’d written three of the Nora Tierney series, and she now alternates writing the two series.. The books in order in the English series, featuring Nora Tierney, an American children’s book author who lives in England, are: The Blue Virgin, The Green Remains, The Scarlet Wench, The Golden Hour, and The Evening’s Amethyst. The newer series brings readers nurse Trudy Genova, who is a medical consultant for a NY movie studio, Graff’s favorite nursing position in a thirty-year career before she retired to write full time. Death Unscripted starts the series, followed by Death at the Dakota. In process is Death in the Orchard.

Graff lives in rural eastern NC with her husband and two Aussie Doodles, Seamus and Fiona.