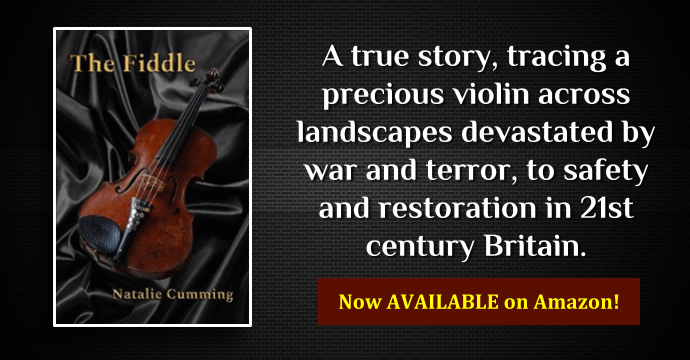 A true story, tracing a precious violin across landscapes devastated by war and terror, to safety and restoration in 21st century Britain.
Abraham and his family flee the Bolsheviks, from St. Petersburg to Odessa and safety in the UK. Abraham’s skill on the violin earns them food and lodgings, as they struggle through the freezing Russian winter.
The violin passes to Rosa, Abraham’s daughter, violinist with the famous Berlin Philharmonic Orchestra. Arrested by the Nazis on Kristellnacht 1938 she is sent to Mauthausen Concentration Camp, and then to Auschwitz, where her musical talent sees her forced to join the Women’s Orchestra and saves her life. She spends the last 5 months of the war in Belsen, before testifying at the Nuremberg Trials, exposing the horrors of the Nazi death camps.
Rosa’s brother Israel, inherits the violin. A celebrated musician, he joins ENSA during the war, entertaining the troops. Post war, he investigates Nazis trying to escape trial. He forms several popular bands, well-known throughout the 60’s & 70’s.
Finally, the violin comes to his daughter Natalie, who has written her family’s extraordinary story, lest the world should ever forget global events, against which the journey of this beautiful instrument is told.
Available on Amazon Goodreads

She became a Freeman of the City of London in 1983 and Member of the Guild of Freemen in 2003. After becoming a supporter of the Missing People Charity in 1986, she served as a Trustee from 1990 to 2007 and continues to be involved with them.

Natalie lives in Shropshire with her husband David. They have two sons, Richard and James.

With thanks to Michael Terence Publishing
www.mtp.agency