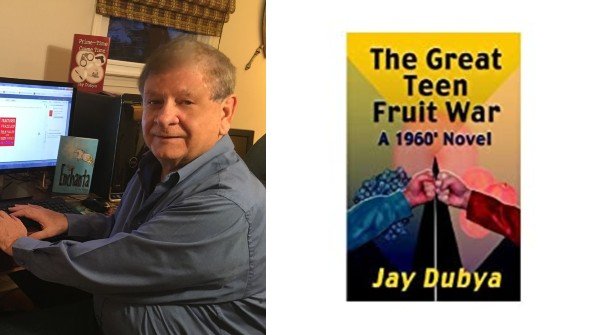 “The Great Teen Fruit War, A 1960′ Novel” is author Jay Dubya’s eighth e-book. The story takes place in Hammonton, New Jersey, an agricultural community midway between Philadelphia and Atlantic City. The Blues wear blue denim button-down waist-length jackets and are the sons of wealthy blueberry growers. The Reds wear James Dean’ red zip-up jackets and are the sons of peach farmers. Bellevue Avenue in the center of town is the dividing line that separates blueberry country to the east and peach territory to the west.

“The Great Teen Fruit War” is a story for anyone who loves ’50s and ’60s teen culture. Romance, racial discrimination and conflict between the Reds and the Blues mix into a “coming of age” story that blends humor with drama, suspense and surprise into an action-packed adventure. Throw the town’ greasers “The Ramrodders” into the conflict and events heat up in a hurry as the three highly volatile gangs interact.

When Goose Restuccio, the son of a Mafia kingpin joins the Reds he challenges Gabe Gillette, the leader of the rich-kid Blues. Goose’s father’s hit men get involved in some clever pranks played on the Blues, and the blueberry kids retaliate with deceptive tricks of their own. Soon strife escalates into violence. Goose is captured by Blues and then forced to rape a black girl, and after Crystal Davis becomes pregnant, her black friends ally with the Reds against a coalition of Blues and Ramrodders. The “Great Teen Fruit War” is the exciting sequel to “Black Leather and Blue Denim, A ’50s Novel.”