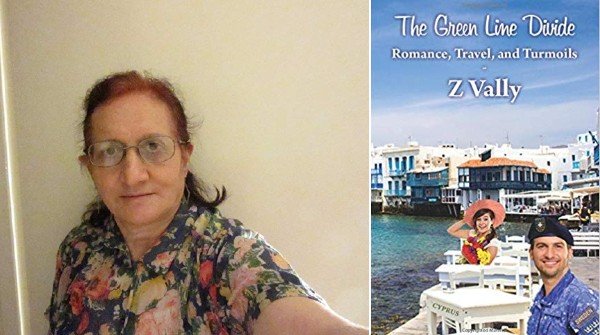 This is a romantic travel fiction, with a touch of humour and musicals.

Join Alexis and Sven, a Swedish United Nations officer on a touching, hilarious journey that carries readers to various parts of the globe to explore romance, relationships, personal growth, and culture like no other than The Green Line Divide.  It is set in the two Mediterranean Islands of Cyprus and Rhodes Island of Greece, and a mention of Sweden which has an Icehotel and Northern Lights to admire.

Alexis is smart and sexy – but, like most people, she’s got a few things holding her back in life. And if she’s to ever move forward, she’s got to confront them–head on.

From failing her school exams and dealing with her father’s illness to being mistaken for a celebrity and avoiding serious relationships at any cost, Alexis’s life is riddled with complications and concerns, some harrowing and others absolutely hilarious. When she meets a svelte Swede named Sven, Alexis’s life becomes even more complicated, and her fear of commitment becomes more pronounced, placing her at a pivotal point: Can she overcome her fears and get married? Or will she search for any excuse to keep from walking down the aisle?

The Green Line Divide: Romance, Travel, and Turmoils follows Alexis’s trials and tribulations in life, love, and relationships, set against a Mediterranean backdrop rich with travel, musicals and culture. A truly informative, laugh-out-loud novel, it is sure to appeal to readers with a wide variety of interests, including tourism, hitchhiking, international history, personal growth, and stories of relationship drama.

Romance, Travel Adventure and Turmoils in the Mediterranean – Cyprus and Rhodes Island (Greece)!

* A fun, funny and fast-paced romantic comedy, as breezy as the wind off the Mediterranean Sea and full of cultural and emotional entanglements. Can love find a way across cultural divides?

* Written by an author with a sound knowledge of the islands of Cyprus and Rhodes, having lived near the Green Line in Cyprus
for many years. The book provides real insight into the towns, people, countryside and seaside of the gorgeous, romantic
Mediterranean island.

* Features a fun-loving, feisty and likeable heroine in search of love but afraid to settle down. You will love Alexis!

Romance, humour and drama combine in this entertaining story about a young woman with a fear of commitment whose independence is thrown into turmoil when she meets, and falls for, a handsome United Nations Swedish soldier. She aims to marry him but just can’t seem to give up her past.

Will Alexis make it down the aisle? Or will her talent for sabotaging her own ambitions win yet again!

Romance, humour, and drama abound in this fast-paced, playful novel–and so, too, do questions and surprises. The Green Line Divide: Romance, Travel, and Turmoils encounters readers with people from various parts of the world, including exotic destinations like Cyprus and the Greek island of Rhodes. And follow a young woman named Alexis as she struggles with gamophobia and tries to come to terms with her independence, relationships, and the future.

Smitten with a handsome Swede named Sven, a United Nations officer, Alexis plans to marry him, but has a lot of issues to confront if she’s to make it down the aisle–and, as she confronts them, The Green Line Divide is sure to touch your heart, educate you, tickle your funny bone, and put a smile on your face.

Will Alexis ever marry? Or will she find an excuse to run away from it all–again? Step into this book for answers. Along the way, you’ll also learn new travel, leisure, and entertainment ideas.

"The novel's strength lies in its descriptions of this scenery, painting a fine image of the island ("a long, broad beach with fine, deep-goldensand, dotted with canteens")." Also, the reviewer says: "the novel shows promise in its prologue as a unique glimpse into young life in acountry not often explored in English-language contemporary fiction.

When not writing I enjoy sewing, cooking, baking, and do-it-yourself projects. I also fancy residential architecture, landscape, sightseeing, reading newspapers, and watching TV news and documentaries. I studied finance and business at a British college. Now, I am a trained clinical/medical coder (junior). Received a book award from Literary Titan. Book trailer is on Author Page. For this, look for link, under Author Page section. It is above the book image in the Author Page (Biography) section.

It is set in the two Mediterranean Islands of Cyprus and Rhodes Island of Greece, and a mention of Sweden which has an Icehotel and Northern Lights to admire.

Dear Reader, author’s recently published book “The Green Line Divide: Romance, Travel, and Turmoils.” is now available on leading bookstores, get your copy now and help the author by writing a review of the book.
Available on Amazon