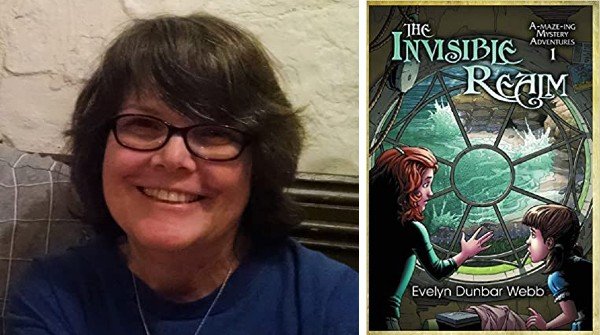 Eleven-year-old Hattie is on vacation. But rather than splash in the water, she’s trapped inside a beach cottage as storm-tossed waves pummel sand and wind bashes shutters. As if that’s not enough, she’s also stuck babysitting for her new stepsister Dacey. Bored to the brink of tears, upset over Dacey and her monstrous cat invading her life, Hattie prods her stepsister into action, and the two girls embark on a treasure hunt, hoping to find something – anything – to keep their minds off the miserable weather.

With the discovery of a map stuffed inside an old desk, Hattie persuades Dacey to join her on a mission to search the nearby caves, which she believes can be reached through a tunnel beneath the cottage, and for the first twenty minutes of their journey, everything goes as planned. But then the path abruptly ends in front of a floor-to-ceiling mural of a park. While Dacey tries to find a hidden door in the cement wall, Hattie notices an odd glow and wavering images within the painting. Before she can warn her stepsister, however, Dacey touches the wall and disappears, and Hattie has no choice but to follow.

Having passed through the mural, the girls realize they have entered the park, complete with sun, colorful birds and flowers, stone benches and birdbaths, and lots of trees. Too intrigued to be scared, Hattie insists they explore before they look for a way back to the cottage. The appearance of an old diary beneath a bench, complete with a second map, helps convince Dacey, and soon they uncover clues about the park and its creators.

Lost inside the pages of the diary, neither girl realizes how much time has passed since they left the cottage until Hattie looks up at the sky. Though she wishes she could stay longer, she feels they need to return, as their parents might already be back from their own trek. But as soon as Hattie suggests they leave, a disembodied voice asks if they need help. Though in shock, Hattie musters as much bravado as possible and demands the voice identify itself.

Over the next several minutes, one by one, fairy tale characters appear: a fancy-dressed cat, a glittering fairy and her sparkling butterfly friend, a baby dragon, and two black bears with blue tee shirts. In the process, the girls find they must travel to the center of the park to locate the path back to the tunnel. But the way back is not easy, for they must struggle through a maze filled with intrigue and danger, riddles and traps. The maze, however, is not the worst of what they will encounter, for as they travel, one by one, their new friends disappear, victims of an evil that threatens their world, and it is this evil that Hattie and Dacey must work together to defeat.

About the Author: Evelyn Dunbar Webb

A lifelong reader, writer, and logophile, Evelyn Dunbar Webb is the recipient of numerous awards for her children’s stories, poetry, and essays, including the Writing for Children – San Gabriel Writers’ League Award (2004); the Margaret I. Raynal Fiction Award (2001); the Margaret Walker Memorial Poetry Award (2001); and the Helen Calvert Ekphrasis Award (2000). After more than four decades as a mother, business owner, English teacher, and workshop instructor, she returned to her first love—spinning tales—in 2016. When she is not writing, she spends her days reading, drawing, gardening, or riding her red tricycle. A native of Connecticut now living in rural central Virginia, Evelyn shares a home with her husband, thousands of books (many of which are hand-me-downs), and the occasional grandchild.