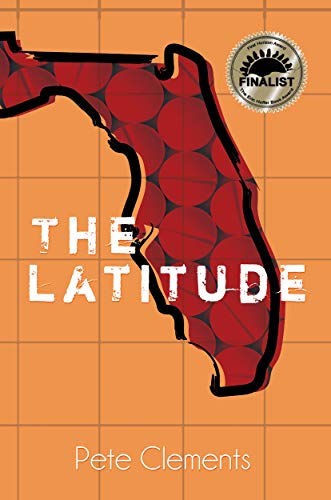 The Latitude by Pete Clements has a thrilling, fast-moving plot line, dramatized by richly complex characters, each of whom has at least one secret more than the reader suspects. When we first meet this tableaux of contemporary Floridian characters, we have no clue about how they will pair off, connect, inform or inform on other characters. As answers to these mysteries, the prize goes to the reader. Yet there is more here in The Latitude to reward the reader. The writing is not only precise and pleasing of phrase, it rises to lyrical heights again and again when the drama supports such heights. Here, the image of the in-coming hurricane: “There was only a dark indistinguishable maelstrom, a gray-water Medusa. Her tentacles curved out and hung, poised to sting in every direction. Around her boneless jellied body, she scooped up froth, spun it, and spat it out on her northwest quadrant in liquid mountains to form tidal waves.” As a reader, I will look for well-designed plot twists and turns, but I will look for more works by an author capable of such lyricism. Bonnie MacDougall, Ph.D. -Author and Novelist 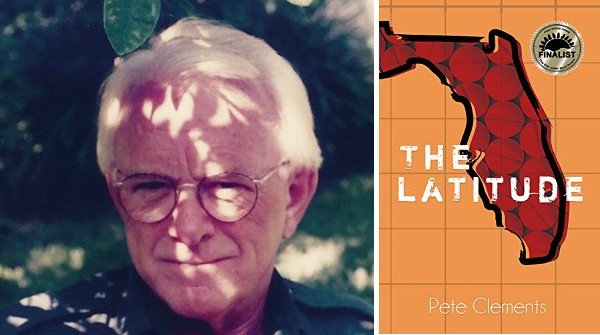 Florida’s Citrus Belt, finest place in the world to grow citrus, Tropical Zone summers, hot, humid, rain. Temperate Zone winters, mild, possible touch of frost, minor chance of freeze. Perfect. Except, the place is directly in the flyway of airborne illegally imported illicit opioids from our neighbors to the south. They fly unseen into the U. S., bound for Midwest and East Coast distribution, invade under cover of night, land in the rural unpopulated groves, commandeer homes and barns, threaten murder, bankruptcy, economic havoc. Some brave young citizens face the traffickers, fight back, bring high seas chase all the way to Bahamas hideouts, battle vicious gunfire and a deadly hurricane, and even find young love. Who wins? This time, you do.

Pete Clements, University of Michigan, A.B. in English/Creative Writing, started as a TV Advertising copywriter, then group creative director, at major AAAA advertising agencies, winning 23 national and international trade awards, including Cannes Film Festival, and finally writer/director/producer in documentary, corporate and sports films and active member, the Directors Guild of America. As writer/co-director, his Indianapolis 500 Motor Car Race corporate documentary film, “The Eddie Sachs Story”, for Marathon Oil Company, was named by the Indianapolis Motor Speedway Foundation “the definitive remark on the philosophy of motor car racing,” and was placed in the Indie 500 Museum, Speedway, Indiana. In 1970, a radical change; Pete moved to Vero Beach, Florida, founded what became a successful retail marine business, was a member of Southern Yacht Brokers’ Association, and wrote and published local newspaper columns and magazine articles. Growing up on the Great Lakes, Pete became an expert sailor, is a graduate of The Sea School Of The Sea, held a USCG Captain License, Ocean Master, Power and Sail, was a sailing instructor, Stuart, Florida, at The Chapman School of Seamanship and was recently the proud owner of the 42’ aux. ketch, “Pendancing”, cruising the Atlantic Seaboard, Maine to the Bahamas. He was is a Past Director, Vero Beach Rotary, Past President, The Hundred Club of Indian River County, former member Riomar Bay Yacht Club and a USAFR Veteran. By the early 1990’s, Pete was a full time novelist. His first novel won the Florida Space Coast Writers’ Guild and Brevard College sponsored 1996 Florida Writers’ Conference, First Place for unpublished long fiction. May 18, 2020, his newly released romance thriller, The Latitude, was named a Finalist Honoree in the 2020 Eric Hoffer International Literary Book Awards, having placed in the top10% of all nominees. The Latitude, published by Black Rose Writing of Texas, continues on “The Best Seller List” at the local Vero Beach Book Center, is available at all bookstores and online venues, print and ebook, including Amazon, Barnes & Noble, Apple Books and others. He continues to make his home in Vero Beach, Florida and is writing a new Florida-based novel.
Dear Reader, author’s recently published book “The Latitude” is now available on leading bookstores, get your copy now and help the author by writing a review of the book.
Available on Amazon