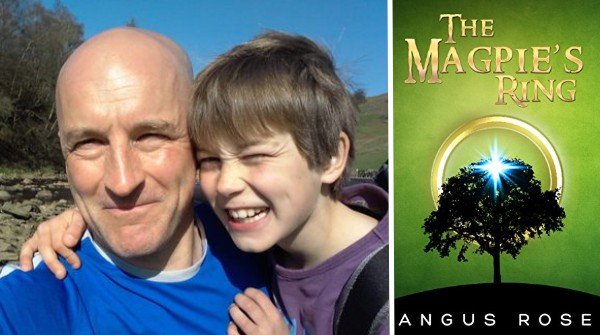 A page-turning debut novel in the tradition of Susan Cooper, The Weirdstone of Brisingamen and The Owl Service, The Magpie’s Ring is a classic magic fantasy tale of good vs evil, immense courage, friendship, wizardry and undying loyalty.

‘For parents who remember reading Susan Cooper or Alan Garner as a child this is a worthy successor.’ M. Berney

‘This book is one of the best books I’ve read this year.’ Aimee Layton – Book Reviewer at Summer Reads

‘This was a fun action/adventure for young and older readers alike. With magic, dragons, wizards, goblin-like creatures and more, it’s an engaging crossover starring a boy who lives in our ordinary world where such things don’t exist.’ Joe Jackson – Author of ‘The Eve of Redemption’ series.

When young Ned Penhallow, a courageous boy with a taste for adventure, discovers an old ring within the trunk of a tree, little does he know that what he has found is an ancient artefact which has been lost for centuries.

But soon he discovers that there is something dark and malevolent, which wants it for itself and is prepared to go to any lengths to get it. This evil is now relentlessly pursuing Ned, determined to recover the ring.

When Ned’s younger brother falls into a coma, the result of a car accident caused by the dark menace, his soul is stolen as he falls into unconsciousness. Ned knows that he must now act to try to save him and the world, as the shadow of evil creeps ever closer.

Aided by the last known survivor of a group of mages, a pirate captain called Ruby and a dragon called Marganth, Ned must embark on a journey which takes him to a strange new world. There, helped by his new found friends, he must face the greatest peril and confront the dark evil which took brother’s soul, in a titanic battle of good versus evil.

For parents who remember reading Susan Cooper or Alan Garner as a child this is a worthy successor. Ned's life is turned around after he finds a ring in a storm-blasted oak. He is drawn on a dangerous journey to rescue his brother's soul and must battle ogres and an evil sorcerer. To help him he befriends the birds, a crew of sailors, a dragon and... his school caretaker. This debut novel has echoes of the fantasy stories I remember loving as a child but is very much a new voice with new ideas (I particularly liked the lampwings).

Angus Rose has spent a number of years trying to rearrange his skeleton into new and interesting shapes. He has succeeded in doing this in several different arenas including hang-gliding, parachuting, rock-climbing, jui-jitsu, and mountain biking. He has also been known to walk long distances over very big hills carrying very big rucksacks, an activity that has led to a life-long addiction to Mars bars and fresh air. He has decided that maybe now is the time to settle down to do something that will hopefully not lead to any more scars or broken bones, and so has entered the world of fiction writing. His first novel, The Magpie’s Ring is the story of Ned Penhallow, a young boy who is dragged unwittingly into a centuries-old battle between the forces of good and evil. Angus began writing the novel one particularly bleak winter’s day when he decided to write about a tree standing in the playground of a school opposite the office in which he worked. From those few sentences grew an entire story and the characters of Ned, Sam, Great-Aunt Gail to name but a few, were born. When not writing, Angus can be found standing on the touchline of the local rugby pitch, watching in despair as his children play their version of rugby. It is a version which sadly doesn’t match his own and frequently leads to tears of frustration. When not weeping with bitter disappointment, Angus can be found talking to his chickens. Failing that, he can be found walking the hills around Marple Bridge looking for the badger that ate half of his Croc. Angus is currently working on his second novel, The Slate People, and hopes to be able to afford some new Crocs one day.

The Weirdstone of Brisingamen and The Owl Service, The Magpie's Ring is a classic magic fantasy tale of good vs evil, immense courage, friendship, wizardry and undying loyalty.

Dear Reader, author’s recently published book “The Magpie’s Ring” is now available on leading bookstores, get your copy now and help the author by writing a review of the book.
Available on Amazon