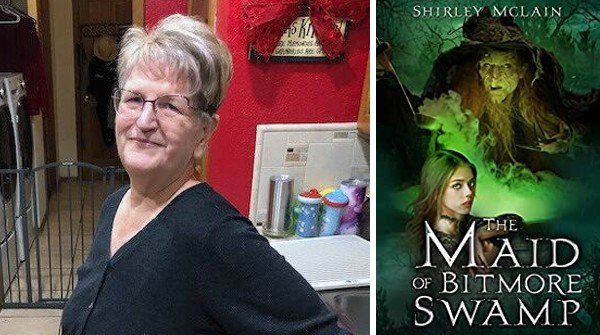 The Maid of Bitmore Swamp

The Maid of Bitmore Swamp was a vile, filthy witch, ugly in her nature and looks. Her name was Bethelda Nightshade from a village called Candlewick. After running away from her pleasure-seeking step-father at the age of fourteen, she had spent most of her life in Bitmore Swamp. She spent her years in the swamp conniving and cheating mortal men and storing her money.
As payment for a spell she created, she received a baby girl, whom she named Anya. Bethelda groomed Anya to replace her when the time came. Bethelda’s teenage daughter rebelled and told her mother she would live her life outside of the swamp. Bethelda feared for her daughter.
Bethelda left the swamp for the first time after many years to seek help from her twin sister, Bethany. That one visit created a change in Bethelda. She cleaned herself up with the aid of her sister and once again created the beautiful woman she was meant to be.
Beth found a man named Talmadge Merriweather to assist Bethelda with her plans. Tal proved to be invaluable to both Bethelda and Anya. He saved them more than once.
Bethelda was a changed woman and told Anya she would be leaving the swamp with her. They could go to Candlewick under the guise of a widowed Duchess, Bethelda DeCrecy, and her lovely daughter from France. Bethelda’s goals were to keep anyone from learning of her past and purchasing her dream estate.
Bethelda and Anya are picked up on the road to Candlewick by Viscount Randolph, who became a friend to the Duchess. He introduced his cousin, Lord Percival Andrews, to the women. Lord Andrews requested all to call him Percy. He was a personal advisor to the King and Queen of Overton, who Bethelda knew from years past. He was also the Queen’s cousin.
Bethelda was set up to reveal her identity and was also blackmailed. Does she have a chance to live out her life in the piece she wants, or will she fall victim to her past?

About the Author: Shirley McLain

Shirley McLain is a retired RN, wife, mother, and grandmother of six and Great Grandmother to four, three boys and one girl.

She is currently living in Sapulpa, Oklahoma where she is enjoying her retirement to the fullest. She was born in California but lived her growing years in Oklahoma. She has done extensive travel within the United States and learned to appreciate each state for its own beauty. Her dream trip is to see Spain and Italy at a slow pace.

Shirley has published a young adult mystery called “Crimes and Retribution”, a book of short stories called, “Shirley’s Short’s and Flashes and a Christian poetry book called, “Verses For My King.” Dobyns Chronicle s is a historical fiction in which you follow a family through troubling times. She has published(should be on the market the end of January 2020)her educational fiction about Bullying. It is for ages 10 to Adult to help them deal with bullying in school.

Shirley’s love of travel, adventure and writing have created works that will hold your attention, and leave you wanting more.