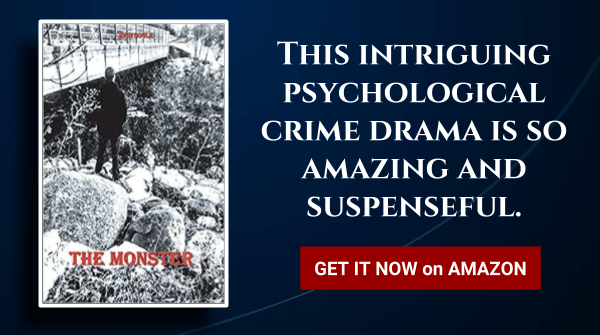 The Monster by Josh Soule

Josh Soule’s premiere thriller, The Monster, follows the psychological decline of a nameless narrator who tells his tale of being stalked and framed by a local serial killer.His relationships with friends and family deteriorate, and he soon is required to fend for himself. As days tick by, the time must come to find his way out of this problem before he ends up in prison or worse…
Available on Amazon Goodreads

“Once in every generation, a monster awakens.” In The Monster by Josh Soule, a college student is having a rocky relationship with his mother, still pining for his ex-girlfriend, and feels betrayed by his friend when he sees them together at a Halloween mixer. When a stranger – who is dressed as a puppet – hurts the couple, the protagonist is framed for the aggression, which is the beginning of his series of misfortunes. The nameless protagonist, who’s also the narrator, considered himself unlucky compared to others; a ‘disease’ where bad things often happen to him. The one he dubbed the ‘Puppet Man’ is the biggest ill luck he has ever encountered, and trying to solve his problem by running away made me question his decision more than once.

Soule’s short novel seemed to be a slow burn at first, but things start to escalate for the character pretty quickly. One of the characters, Professor Jackson, says this to the protagonist, “The decisions you make today set the path for tomorrow.” He finds it “oddly comforting and soothing”. There are similar quotes with the same meaning but I find Jackson’s is more straightforward and better worded. As a reader, it had a profound motivating effect on me as well. From start to finish, I was emotionally invested in the story and the characters. The Monster is probably the perfect epitome of someone being in the wrong place and at the wrong time. However, this intriguing psychological crime drama has a twist in the end. Overall, this is a solid debut from Josh Soule.

Josh Soule is a self-published author from Wyoming.

He has worked in Law Enforcement, security, social work, and currently in education as a Behavior Specialist. Josh enjoys taking his experience and creating psychological, thriller, crime, and suspense stories.

Josh has  earned a Master’s Degree in Business and is beginning the journey to earn a second degree in education.