Congratulations Leon for winning an award at the Great Southeastern Book Festival ... (added 5/6/13) The Oil Man represents an eminently readable action/adventure thriller, fluidly flowing from the accidental discovery of an unknown object and the unsolicited receipt of an encrypted e-mail from a friend, through the Louisiana oil culture on an offshore drilling rig, into the back-bay Bayous, to an explosive climax in a high-rise New York boardroom. Propelled by a potentially momentous discovery that may change the face of the world's energy acquisition and production, we follow John Marx and his close friends through dangerous and unwelcome encounters with malevolent corporate archetypes. Along the way, the reader is exposed to a number of intriguing, but not overly technical theories, about oil drilling, the origins of oil on Earth and the computational complexity of storing large amounts of oil exploration data in mysterious crystals. The main character, John Marx faces substantial life-threatening risk as the action flows from the opening pages to the final chapter that drives the reader's curiosity towards an explosive conclusion. With dead bodies stacking up like cordwood, we fear for John's safety; as each turn results in decisions that will affect the lives of himself, his family and co-workers. Even though, the action/adventure draws heavily on the author's personal knowledge and experiences, I found it somewhat disconcerting to find the author's unusual Louisiana French name, Puissegur (pronounced poy-see-gur), inserted in the action. But that is just a personal prejudice left over from Clive Cussler's various novel adventures. I recommend this book with no hesitation, confident it will provide an enjoyable read. One can easily envision The Oil Man being made into a high-grossing feature film. 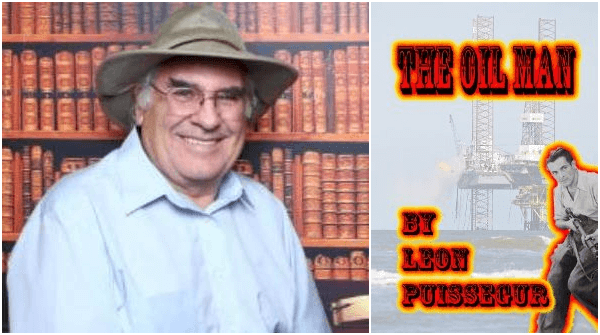 Avid conspiracy theorist John Marx, supervisor on an oil derrick in the Gulf of Mexico, comes into possession of an email and box that changes first his, then the world’s point of view about oil. It all comes down to not who controls the world’s petroleum supply, but who people, corporations and governments think control it. Tempers explode, guns flare, people die, all due to an email and a shard of crystal.

THE OIL MAN is now being converted to a Screen Play. We will let all know when we move to the next level -Movie. In 2013, THE OIL MAN won an “AWARD” in the Great Southeastern Book Festival!! This book is now an “AWARD” winner and it will be placed in future contests to win more “AWARDS”! THE OIL MAN won 3rd place at the Pacific Rim Book Festival in the Science Fiction catagory. The second time to win an Award! As a writer and author, I’ve been involved in a love-hate fight all my life with my last name, “Puissegur,” feeling the need to defend my unique Louisiana French heritage, despite a name few Americans could read, much less spell or remember easily. Interestingly, it was this peculiar last name that led me to research not only my family history, but my own fascination with conspiracy theory and, in Louisiana, it’s very heart and soul: oil. In the process it became clear that I had a special message to convey through fiction. In my newest book, THE OIL MAN, an action/adventure, I base the main character, John Marx, after myself. I grew up just south of New Orleans in a town called Chalmette, close enough to the marsh lands and bayous to be able to travel, hunt, fish, and generally enjoy the bayou life, and, yes, I actually worked in the oil fields of Louisiana just like John Marx. I left high school early, got married, joined the Army, and proudly served my country. After serving my enlistment, I returned home, finished high school, completed junior college, and became the president of a union. The job eventually moved to Mexico and later Brazil, and I was left out of work for a year with a family to raise. I drew heavily upon my union experience to animate the characters, corporate, management and workers, of the offshore oil environment in which much of THE OIL MAN is set. I worked briefly as a plumber /mechanic, then changed jobs and moved up in the Postal Service where I eventually became an electronics technician. The road was as difficult for me, as the road was for John Marx. I was harassed for an injury I received while in the Army, in the end receiving acknowledgement and restitution. Back home again, I began writing. Having completed my fourth published work – this one I’m pleased to offer to you – I firmly believe it is the best I’ve written so far. Filled with action, adventure and intrigue from beginning to the end, it touches on some of the newest threads of global power: public opinion, computer technology, petroleum theory, all within the arena of oil – Black gold. Petrodollars. Power. I have begun work on a sequel which I hope to present to readers in the near future. I wish I had better edits on my other 3 books, THE OIL MAN, Savant Books and Publications, is the best book I have at the moment.
Dear Reader, author’s recently published book “THE OIL MAN” is now available on leading bookstores, get your copy now and help the author by writing a review of the book.
Available on Website